Russian Foreign Minister Sergei Lavrov admitted that the issue of ownership of the South Kuril Islands will be decided by a referendum. Meanwhile, Japan is not the only country that makes claims to Russia. Estonia is open about its claims, while Germany and Finland express them indirectly. What would the results of the vote be? Is there a risk that Russia loses the Southern Kuriles, a part of Karelia and the Kaliningrad enclave?

Before the beginning of his visit to Japan, Lavrov gave an interview to a Japanese television company NHK. When asked about the status of the South Kuril Islands, Lavrov said: "In our case, this is the matter to be decided through a referendum." However, Lavrov made a reservation that this is not an immediate issue. One way or another, but a high-ranking Russian official for the first time publicly acknowledged that the status of a Russian territory could be decided by popular vote.

Meanwhile, Lavrov's words are alarming. Japan is not the only country making territorial claims. Estonia openly calls for the return of Pechora district of Pskov Region. Only four years ago Latvia abandon its claim on Pytalovo district of Pskov region. Some politicians in Finland openly raise the question of the status of Vyborg, some areas of Karelia, and the port of Pechenga in Murmansk region. 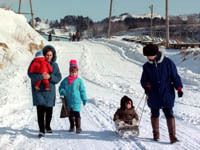 Kaliningrad region is another matter. Several years ago, a Bundestag representative from the CDU spoke of creating "East Prussia". The hint is clear as once this region had this name as part of Germany. In addition, certain forces in Lithuania call this land "Lithuania Minor". Poland does not express claims to Kaliningrad openly, but among the Poles, too, sometimes one can hear about "Our Krulevets."

If the Russian authorities are ready for the referendum, they must be certain that people will vote patriotic. But will they? Japanologist Alexander Kulanov told "Pravda.Ru" about the ways the Japanese are actively fighting for the minds, hearts and wallets of residents of the South Kuril Islands.

"The Japanese are actively implementing programs for visa-free regime, inviting residents of the Kurile to visit Japan. The purpose of all this is to show how the Japanese live, and compare it with how they live. In addition, Japanese channels have special broadcast for the Kuril Islands. We have nothing to match this propaganda."

Of course, many are drawn to Japan because it is far less expensive to get there than to other regions of Russia. This is true for other residents of the Far East. Unfortunately, the federal government often looks at the provinces from the point of view of natural resources", Kulanov stressed.

People on the Sakhalin and Kuril forums now and then express the view that they would live best as part of Japan. It is not confined to the South Kuriles. In spring of 2008 it was reported that nearly half of the population of the Pechora district of Pskov region have acquired Estonian passports.

It was reported that the analysis of the situation showed that the Estonian authorities were active in expanding its political, economic, social and informational influence in Pechora region. The propaganda was successful. For example, young people prefer to join the Estonian army over the Russian one. The passport of the neighboring state provides free movement in Europe.

Vyborg and Karelia are being actively developed by Finnish companies. Local people are learning the Finnish language. One of the forums openly invites to discuss the pros and cons of joining Finland.

Finally, the situation with Kaliningrad region, experiencing the inflow of German capital, is not that simple. The complexity of containment of the region for Russia is that it is cut off from the rest of the country. The enclave is surrounded by the EU, and its citizens regularly travel to Europe - more often than to the "big" Russia. German capital began to flow here long before Lithuania and Poland joined the EU. Germany officially makes no claims to the former East Prussia. Yet, six months ago Der Spiegel magazine published an article stating that in 1990 the USSR wanted to return "Konigsberg" to Germany.

The publication wrote that the proposal was contained in a secret telegram sent to the German embassy in Moscow by Mr.  Batenin, one of the top Soviet generals at the time. The Germans clarified that Mikhail Gorbachev had nothing to do with it and Batenin acted on his own behalf.

The problem exists in the Southern Kuriles, Vyborg and Kaliningrad, and Pechora region. In all cases, the neighbors live better, and the level of corruption is by several orders of magnitude lower than in Russia. Does Russia risk losing the border areas as a result of the referendums? How dangerous is the statement of Lavrov? President of the Academy of Geopolitical Issues, Colonel-General Leonid Ivashov, spoke about this in an interview with "Pravda.Ru":

"Russia's referendum is likely to confirm that Southern Kuriles belong to Russia. Lavrov's statement, however, is sad as it means that Russia has changed its policy. Previously, we firmly stated that we would not give up the island, and our officials visited there. Now we excite the unhealthy interest of the Japanese to the claim. We must cut off the issue once and for all and have no controversy in this regard.

We have something to say to Japan. Soon they will be washed away into the sea. We need to talk about investments in the Far East and cooperation in high technology industries, the establishment of infrastructure there. And only then talk about a referendum. If we do not invest in the regions we will lose them. And not only the Southern Kuriles, but the entire Far East inhabited by the people of other nations.

No bans will help. Russia, and not Finland, should develop industry, agriculture, social infrastructure in the north-west Russia. We need a large project that would tie Vyborg to Russia. We need the people of border areas to perceive Russian culture, Russian science, to embroil in the Russian space. At the same time, we must enact laws to toughen the rules of the foreign presence in the border regions.

With regard to Kaliningrad, Germany is already engaged in creeping expansion - calmly, but firmly and consistently. As for Russia, there were federal programs for the development of the region, but the money was stolen. Russian business does not go there, there is no state planning. We have opened the doors to foreigners and the Germans are taking advantage of it. We will lose Kaliningrad unless we undertake a comprehensive development plan for the area and attach them to Russia via state business. Because Belarus is the closest to the region geographically, the area must be tied to it as well. We cannot give competitors a reason even to think about the claims against us. "