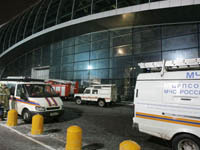 January 24th marks a year since one of the largest terrorist acts that occurred in Russia during the recent years. It goes about the explosion at Moscow's Domodedovo International Airport.

Magomed Yevloev, a 21-year-old suicide bomber, a resident of the village of Ali-Yurt, Ingushetia, detonated his explosive device on January 24, 2011. The terrorist conducted the explosion in the crowd of people, at the arrivals room of the airport.

The man was wearing a bomb belt. The device was filled with destructive agents. The power of the explosion was equivalent to seven kilos of TNT. Thirty-seven people were killed, 173 others - both Russian and foreign nationals - suffered injuries in the attack.

The basic investigation of the terrorist act was finished. On Tuesday, Russia's major news agencies quoted the brief report from the official spokesman for the Investigative Committee of the Russian Federation, Vladimir Markin. According to the official, 28 gunmen, members of Imarat Kavkaz terrorist group, were involved in the terrorist attack. Seventeen of them were destroyed, four were arrested.

"The terrorist act at Domodedovo Airport was organized by Doku Umarov, the leader of Imarat Kavkaz terrorist group. Umarov commanded a criminal gang under the leadership of Aslan Butukaev and Supyan Abdullaev. The latter picked and trained Magomed Yevloev for the terrorist act. There were approximately 35 people in the organized criminal group," RIA Novosti quoted Vladimir Markin as saying.

"On March 28, 2011, the terrorist camp was destroyed in a special operation conducted on the territory of Ingushetia. Seventeen terrorists were killed on the scene," Interfax said.

The following terrorists were arrested during the special operation - Islam and Ilez Yandievs (two brothers, who took the bomber to Domodedovo), Akhmed Yevloev, the terrorist's brother, who assisted him in the attack, and Bashir Hamhoev, who personally participated in the training of the suicide bomber and arranged his arrival to Moscow from Ingushetia.

The final text of the charges against the four arrested terrorists is currently being prepared. Seven other members of the gang are on wanted list. Their names are Umarov, Butukaev, as well as Rustam Altemirov, Zaurbek Amriev, Mikail Bogatyrev, Islam Yevloev and Ibrahim Torshoev. All of them were preliminary charged with committing terrorist crimes. Officials with the Investigative Committee said that they were investigating the information about the killing Altemirov and Amriev in Istanbul on September 16, 2011.

The international community could not leave the bombing of the Moscow airport without attention. A committee of the UN Security Council included Doku Umarov on its consolidated black list. All UN members are supposed to introduce sanctions against Umarov. His financial assets should be frozen, providing any assistance to Umarov, including arms shipments, financial support, etc, should be banned.

The US State Department announced the reward of $5 million for the information about the whereabouts of Doku Umarov.

Reportedly, the explosion at Domodedovo International Airport was one of three large-scale terrorist attacks, which Umarov planned to conduct in the Russian capital in January 2011, The Kommersant Daily said.

Two female suicide bombers, Zavzhat Daudova and Zeinap Suyunova, were supposed to explode themselves during the mass celebrations on New Year's night on Red Square. The two women were the wives of Dagestan gunmen, who were also members of Imarat Kavkaz. However, when the women were going to leave their hotel room, the bomb belt of one of the terrorists exploded. The terrorist died on the scene.

The other bomber - Suyunova - was later captured in the city of Volgograd. The woman told the police that Vitaly Razdobudko, a Russian Wahhabi, and his wife Maria Khorosheva, could commit another terrorist act in the Russian capital.

The two people, just likethe Domodedovo bomber, were trained by Doku Umarov and Aslan Butukaev. Having learned of the new explosions, special services concentrated on Dagestan, from where Daudova and Suyunova came and where Razdobudko and Khorosheva were hiding. Tens of special operations were conducted in the republic.

Razdobudko and Khorosheva failed to leave Dagestan. They killed themselves on February 2011 in the village of Gubden. Two local police officers were killed and 27 were injured in the blasts, which the couple organized.