Belarus turns its back on Russia for China 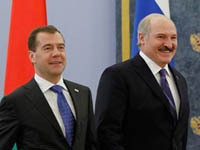 China is strengthening its position in Belarus and pushing Russia out. It is no accident that on January 19 in an interview with Chinese media Belarusian President Alexander Lukashenko said: "We are very grateful that the Chinese government cares about us." However, he stressed the flexibility of Beijing's international politics: "You have good relations with the Americans. Yes, you have irreconcilable differences. But you are not butting heads on any positions thanks to the wisdom of the Chinese leadership." According to Lukashenko, the actions of the Chinese leaders are a good example to follow.

Lukashenko is particularly impressed with the ability of China to control the Internet, not allowing its use to destabilize the country. "We learnt something in this respect, too," said the President. At the same time, he cautioned the enemies against the attempts to destabilize the situation in China: "1.5 billion people live in peace, and China is growing. God forbid that the situation in China is destabilized. It will be bad for everyone: the Americans, Japanese, Russians, both Europe and America."

He then offered to help China in cooperation with the countries included in the Single Economic Area: "China does not need to fear the EEA. Yes, the competition will always be there. But reasonable people will find a compromise. China is very mobile in this regard, very aggressive in promoting its products. Now there are common rules: if you come to Belarus - consider that you have come to Kazakhstan, consider that you have come to Russia.

If the "Midea-Horizont" (joint Belarusian-Chinese enterprise) now produces microwave ovens, vacuum cleaners, you are free to sell products in this joint venture's market with 170 million people. This is a very decent and spacious market." In other words, Lukashenko is ready to personally open the door to Russia for Chinese products, which is unlikely to please Moscow.

What caused these speeches of gratitude and such actions? The development of Belarusian-Chinese relations is not big news. In its foreign policy, both countries have traditionally supported each other. For example, Minsk has stood up for Beijing when the West put pressure on it for the suppression of riots in Xinjiang Uygur Autonomous Region in the summer of 2009. China, in turn, provides Lukashenko all possible assistance when he is pressured by the West and others.

The deepening ties between China and Lukashenko are in parallel to the deterioration of relations of the latter with Russia. He remembers that, thanks to China's financial assistance, Minsk survived in the spring of 2011 when, according to the Belarusian side, it was subject to a combined "energy and currency attack" from foreign banks and some Russian entities.

According to Lukashenko, the Russian oligarchs hoped that Belarus, placed in a desperate situation of the acute shortage of foreign currency and disruptions in electricity supply would surrender and allow them in exchange for money and cheap energy privatize the country's machine-building complex on onerous terms.

Until recently, China was the fifth largest trade partner of Belarus beyond the CIS (the fourth in terms of imports and eighth in terms of exports). But each year China's influence grows stronger. In 2006 their goods turnover reached the mark of over one billion dollars. Two years later, it doubled. Despite the global financial crisis, in 2010 this amount reached $2.5 billion.

China provides Belarus with cheap, in terms of world prices, but at the same time, sophisticated technology and consumer goods. In turn, Belarus supplies to China potash fertilizers, caprolactam, the famous large dump trucks, machinery, electronics and metallurgy products. There are a number of prominent offices of Belarusian enterprises in China. Thanks to the Chinese supply of electrical equipment Minsk intends to modernize its energy plants shortly. In addition, China has supplied equipment for the operation of the Belarusian mobile communications.

Belarus imports much lower volume of goods to China than China brings to Belarusian territory. Although Minsk is trying to reduce this gap, in terms of these indicators it lags behind China nearly four-fold.

Moreover, the Belarusian export has insufficiently diversified, which creates great risks for Minsk. For example, in 2009, when Beijing refused to temporarily purchase potash fertilizers accounting for 52.7 percent of Belarusian exports from Belarus, Lukashenko was in a very difficult situation. We cannot rule out that in the future China will not do the same with the Belarusian caprolactam, which accounts for more than a quarter (25.2 percent) of Belorussian exports to China.

In any case, China's position in Belarus, strategically important for Russia and the EU, is getting increasingly stronger. An important conduit of Chinese influence in Belarus is a former Ambassador to China Mr. Tozik, who promotes the Chinese experience in the economic and social spheres.

Suffice it to point out the ambitious construction projects of Chinese companies in Belarus. For example, construction of "Chinatown", where Belarus provided plots for investors from China for free is ongoing in Minsk. Active interaction is observed in the field of education. In 2011 the second Confucius Institute was opened in Minsk. Several thousand Chinese students study in Belarus.

In the near future China will give Belarus major investments. This, among other things, is implementation of the intergovernmental agreement on the Sino-Belarusian industrial park. The economic and technological cooperation will give Minsk hundreds of millions of dollars of investment in 2012. In particular, it will be spent on modernization of "Dobrush paper mill," construction of a plant for production of soda ash in the Mozyr district of Gomel region, and Vitebsk hydroelectric power station on the Western Dvina, as well as the creation of the national Belarusian satellite communication and broadcasting.

This is an indicator that China will participate in privatization of Belarusian enterprises that Russia has been eyeing for some time. As a result, the relations with China may become a focal issue for Russia. This is clearly indicated by September visit to Belarus of the Chinese parliamentary delegation and the agreement signed by Minister of Economy of Belarus Nikolai Snopkov and general manager of China National Engineering Corporation Xu Jian Sinomach.

China has its reasons to sponsor Belarus and give Lukashenko loans. First, it is seeking record favorable conditions. Second, one of the main conditions for granting loans to China is buying Chinese commodities with Chinese money. In other words, China maintains its own economy with its loans to Belarus. It is no accident that in 2010, Prime Minister Sergei Sidorsky severely criticized this practice. At the time it was the case of the supply of low quality equipment for cement plants.

Yet, the Chinese side does not support the Belarusian economy free of charge: the refusal to purchase fertilizer in Minsk in 2009 was driven by the desire to get them at the lowest prices.

Why does Lukashenko prefer Chinese capital to the Russian one? First, he is open about the fact that in the event that oligarchs from Moscow come to his country, he fears that instead of independent state his country will turn into "the Belarusian oblast of the Russian Federation", and generally lose any authority.

Sources in the Belarusian government circles report that Lukashenko remembers reports in the foreign media that Moscow in the past Belarusian presidential elections in defiance of him funded or was prepared to fund other candidates.

According to Lukashenko, the Chinese capital is much easier to control than the Russian one because the main thing for the Chinese is business without the imposition of political rules of the game.