Putin: Russian Achievements and Challenges for the Future 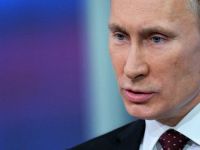 At the beginning of this year, Prime Minister Putin held a government conference, highlighting the achievements of the Russian administration for 2011, pointing out and discussing plans for the future.

The Russian Federation's economic results in 2011 are among the best in the world. Its GDP ranked third among the global economies, with China and India in the first two places. GDP growth in China stands at 9.5%, in India at 7.8%, in Russia at 4.2%.

The Russian Federation occupies the fourth place in terms of industrial output after China, India and Germany. Germany had 7.2% output, Russia had 4.7% in 2011.

Inflation is still rather high with 6.1%, the Prime Minister said, but this is the best figure Russia has had over the past 20 years.

In contrast to other ailing world economies, the Russian Federation has no budget deficit and will boost a 0.8% budget surplus in 2012.

Regarding the federal budget, revenues in 2011 totalled 11.350 trillion roubles, 2.5 trillion more than initially planned. Revenues amounted to 21.1% of GDP in 2011, 2.6 percentage points higher than in 2010, primarily due to increased tax revenue, in particular VAT.

In 2011, the oil and gas revenue was 5.6 trillion roubles, which have partly been channeled into the Reserve Fund (1 billion roubles).

According to Putin, fighting unemployment is another area where Russia has done remarkably well, holding the third place after China and Japan, virtually sharing this ranking with Brazil. In December 2011 the unemployment rate in Russia was at 6.2%, while being at 6.3% in Brazil.

These overall good economic results were attained thanks to the action taken by the Russian Government and regional administrations, with focused inflation targeting and anti-inflation measures through various avenues, including efforts to curb prices and supporting agriculture.
Putin emphazised that in 2012 one of the government's aims will be to shift the emphasis from commodities to innovation, creating more high-tech jobs, in order to achieve real economic diversification and reduce excessive dependence on the oil and gas sector.

The Prime Minister wrote a detailed article for the newspaper Izvestia which can be read in English on his government blog. In this text he states his position on a number of issues for the upcoming presidential election on the fourth of March.

Sustained economic development figures first and foremost in it. Russia's economy is growing, poverty is down 150%, compared to 1990, the Prime Minister proudly points out. Furthermore Russia has developed a solid middle class. In 1998, it made up only 10% of the population, in 2012 it is 30%. Putin's aim is to help expand the middle class to become the majority in Russian society.

Education is another field where Russia has made great progress. Of the people between 25 and 35, 37% have a higher education, and the number is growing. There is virtually an "educational revolution," creating a favorable background for the future.

Putin points out that Russia's wealth has been distributed more evenly, especially oil and gas revenues. But of course the natural resources will not last forever. Diversification and innovation will be necessary. The government wants to create 25 million new high-tech jobs. Individual initiatives are also to be encouraged.

Regarding Russia's position in global development, Putin is speaking out against "phony principles," unrestrained borrowing and living on virtual rather than real values and assets. This attitude, according to the Russian Prime Minister, undermines global stability and provokes conflicts. People must not live beyond their means. They must repay their debts, increase their real incomes and create reserves. This is necessary for individuals as well as for entire nations.

Putin is a realistic man, an analyst with a sharp mind. He is against populist rhetoric. The world is facing a systemic crisis. In his opinion, it has nothing to do with market volatility. He has no illusions, knowing that the period of global turbulences will be prolonged and painful.

Global economic processes and the military political situation have become unpredictable. Destructive forces are growing fast, threatening global security. Using military force to "export democracy" will not be the solution, according to Putin. Russia will respect international law and state sovereignty.

In Russian society, social NGOs will be supported. Russian society should strengthen shared values and priorities, respect for the law, religious freedom and tolerance.

Putin deems that in 2012, the post-Soviet phase is over, the recovery period has come to a close. All the necessary conditions for progress have been created. The restructuring phase was successful, Russia is stable and healthy. It has regained its prosperity and sovereignty.

In the next decade Russia will take the lead in business and industry. It will become stronger and reinforce its status in the world.

Russians have always been proud and reliable people, gathering strength in the face of difficulties and finding solutions. It is a great nation with dignified people. In the course of its long history, Russia has overcome many ordeals and has been victorious.

With Vladimir Putin as president, the Russian Federation will keep solving many issues and master new challenges in the future.