Putin still out of competition 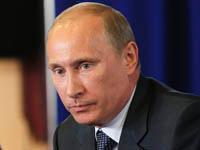 Rallies against the policy of "United Russia" and Vladimir Putin are held in Moscow, the blogosphere is happy to discuss the failures of the Prime Minister and spam at a campaign website of the presidential candidate, and the election rivals of Putin already see themselves at least in the second round. In short, there is an expectation of the failure of Putin in the election. However, this is very deceptive.

It must be admitted that the current rating of Vladimir Putin's popularity, when compared with 2000, 2004 and even 2008, is not the same. For example, according to the polls, in 2007, the level of electoral support for Putin as a potential presidential candidate was in the range of 60-66%. If he was able to go for a third term, there is no doubt that he would confidently win.

But the circumstances were different, and a new political configuration of power marked by the tandem of President Dmitry Medvedev and Prime Minister Vladimir Putin emerged in the country. Experts still speculate how successful the strategy of the tandem was. However, the past four years have shown its viability and effectiveness. Another consideration is that two leaders emerged in the country, although complementary to each other, but at the same time independent politicians. Of course, in varying degrees the sympathy of the electorate was divided, and to some extent it influenced the decrease in personal rating of Putin.

In fact, a factor of classical mathematical impossibility of unification of the two ratings of the Russian leaders was triggered, burdened by the difficulty of the choice between two equals. Especially given that both Putin and Medvedev have formed their own teams fans who regarded another member of the tandem with certain jealousy.

One of the reasons why they switched places was personal ratings, which, as explained, were higher with Putin than with Medvedev. This issue is highly controversial. At least the gap, even if registered by the polls, was quite small.

Either way the decision on castling was made and was likely to have played a crucial role in the emergence of a little more hostility towards Putin. Some had hoped that Medvedev would continue the reforms that he initiated, someone found the fact of castling dishonest. The situation was similar in 2008, when some thought that Putin has cheated them refusing to go to the elections.

Yet, the emotions eventually subsided, and Medvedev, little by little, made people recon with his persona and the political outlook for the country. Something similar will happen after these elections, the victory in which is likely to go to Putin who, in spite of all the allegations, is ahead of his competitors by a wide margin.

According to the latest opinion poll, the percentage of those who approve of the actions of the Prime Minister has increased by 5-6 percent in October. The electoral rating of Putin has grown roughly in the same proportion. If presidential elections were to be held next Sunday, 48 percent would vote for Putin (in the beginning of December, for example, this number was at 42 percent).Other candidates look like complete outsiders against the Prime Minister: Zyuganov would get 10 percent of votes, Vladimir Zhirinovsky would secure about the same percentage (9%), and Sergei Mironov would be supported by 5 percent of the voters. The results of Mikhail Prokhorov and Grigory Yavlinsky are within statistical error.

A similar picture was the outcome of the analysis by the Levada Center that also asked about the intentions of the Russian voters in the presidential elections. Unfortunately, the results were obtained only for last December, but even then the gap between Putin and the closest competitor was approximately 30 percent. The Prime Minister would secure 36 percent of votes, Zhirinovsky - 7 percent, Zyuganov - 6 percent, Mironov and Prokhorov - 2 percent each.

It is not ruled out, of course, that with time something would change, and the results would be quite different. Yet, so far Putin is the undisputed favorite of the race. The only intrigue is whether he will be able to gain 50 percent of the votes in the first round. However, it seems like a technical issue.

The second conclusion concerns the allegedly growing anti-Putin sentiment in the society. It would be wrong to say that they do not exist, but showing the views of a small group of politically active citizens as the attitude of the entire society would also be incorrect. There are those undecided, the layer of the society that can bring Putin victory or force him to fight with some of the candidates in the second round. This is probably the most important electorate fought for by both the opponents of Putin in the presidential race, and off-system opposition. However, the Prime Minister himself, of course, should not stand aside.