Russia saves Gorbachev from his infamous past 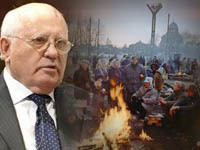 Russia refused Lithuania in interrogating ex-President of the USSR, Mikhail Gorbachev. Lithuania's Office of the Prosecutor General intended to interrogate the first and the last president of the Soviet Union in connection with the events, which took place in Vilnius on January 13, 1991.

On March 11, 1990, the Supreme Council of the Lithuanian Soviet Socialist Republic declared independence of the republic. The central authorities of the USSR claimed, though, that the decision contradicted to the Constitution of the Soviet Union. Mass actions of protest began in Lithuania in January 1991. Special forces and KGB units were deployed in the republic as a result. Fourteen people were killed and over 600 were injured in the course of armed clashes near the television center in Vilnius at night of January 13.

In May 2011, officials with the Office of the Prosecutor General of Lithuania requested Russia's legal assistance in interrogating Mikhail Gorbachev as a witness of those events. Lithuanian officials said that it was their seventh request of assistance in investigating the events of January 1991. The first request was made in December 2010.

According to Lithuanian officials, their Russian counterparts declined the request, having referred to Article 2, Paragraph "B" of the Convention of the Council of Europe from 1959 "On Mutual Assistance in Criminal Matters." Russia also referred to Article 18 of the Russian-Lithuanian agreement about legal assistance and relations on civil, family and criminal matters. In accordance with those documents, a country may not provide assistance if it can harm sovereignty, security, public order or other significant interests of the state that received the request.

Pravda.Ru asked expert opinion from Mikhail Aleksandrov and Grigory Amnuel to find out the reasons for Russia's refusal to interrogate the former Soviet president.

Mikhail Aleksandrov, the chairman of the sector of the Baltic States of the Institute of the CIS, told Pravda.Ru that Russia made such a decision not to play into the current Lithuanian campaign.

"Even in Lithuania, some people believe that it all happened because of those who fired at the crowd of people near the TV center. Lithuanian journalists made a number of publications about it. However, local officials hold the Soviet administration accountable for the bloodshed in Vilnius. They tried to put the executors on trial, but it is obvious that they could not do anything without the order from top officials.

"One can imagine what kind of questions they would ask Gorbachev. What would he say? What if he said that someone at the KGB decided to make decisions single-handedly? He is not on very good terms with the sitting Russian administration. The Kremlin fears that he may say something in the spirit of the 1990s so to speak. If it happened, Lithuania could set its accusations to Russia as a successor of the Soviet Union and ask for compensations as a result. This is what Lithuania wants. The country is still staying in a complicated economic and political situation.

"Formally, Gorbachev can face Lithuanian justice himself, but he does not evince such a wish," the expert said.

Grigory Amnuel, the executive director of Open Dialogue International Club, believes that it is easy to explain Lithuania's actions.

"For Lithuania, it is a matter of conscience to investigate the reasons of what happened. One can not build a democratic country without that. People want to know what happened in the beginning of 1991 in Vilnius. I personally knew Viktor Ilyukhin (former Prosecutor General of the USSR - ed.) and I agree with him when he says that the bloodshed in Vilnius could not happen without Gorbachev's knowledge. It is an open secret that the orders, which defense officials receive, come from politicians. Gorbachev was the Supreme Commander-in-Chief during that time. Defense officials could not make any decisions without him. Why can't they declassify those documents today? It is possible that there are no such documents at all. They could have given the adequate orders orally, not to leave any traces.

"As for Russia's reaction to Lithuania's wish to interrogate Gorbachev as a witness, there is nothing surprising about that. They are not trying to protect him. The Russian leaders do not want to compromise themselves. Besides, the permission to interrogate the Soviet president could create a precedent.

"It has also become a tradition to silence and to forget, to pretend that nothing happened when it goes about unpleasant moments of our recent history. It does not show a positive influence on Russia's image because the country makes itself a defender of the Soviet regime, which was far from being humane."