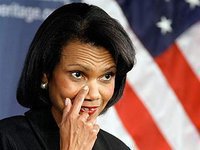 The security advisor and the Secretary of State in the administration of the most unpopular president in US history believes that Putin's intention to run for presidency will lead to mass riots in Russia. Not now, of course, but some time later.

After she stopped serving as the head of the US State Department, Condoleezza Rice became a professor of Political Economy in the Graduate School of Business at Stanford University. Ms. Rice does not release many comments about Russia on her current position. This is the reason why her recent remarks attracted so much attention - in Russia, first and foremost.

Rice's interview to Reuters meets the standards of the conservative wing of the Republican Party. According to her, Putin's intention to run for democracy is a "mockery of democracy."

Condoleezza Rice believes that Vladimir Putin, if elected president, will most likely try to limit dissent and centralize power even further.

This path, Rice said, may lead to mass riots in Russia. The risk for such riots is very high, the former Secretary of State said.

Ms. Rice is not the first person, who forecasts such a scenario, although she is no match to Senator John McCain.

It is worthy of note that the arguments of American scientists and experts about imminent "mass riots" in Russia surprisingly coincide with expectations of a part of the Russian non-system opposition. Aleksei Navalny, for example, does not miss a chance to say that the power in Russia will change in two or three years by the example of "Arab revolutions."

The thoughts about "mass riots' in Russia from the official of the administration of the most unpopular president in US history, sound very entertaining. Condoleezza Rice considers herself a big specialist for Russia. If so, it would be very interesting for us to know why she decided that Putin would "limit dissent and centralize power" in case of his victory? Why does she think that the risk for mass riots in Russia is very high? Is it because the Russians use the Internet and travel abroad?

Speaking about the Internet, the number of Internet users in the Russian Federation is the largest in Europe. The number of tourists is not that high, but several millions of Russian citizens travel abroad on a regular basis and their number constantly grows. It appears that the Russian authorities have chosen a paradoxical way of restricting liberties for people...