Russian passports can save thousands of Kosovo Serbs 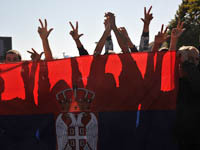 Russian citizenship can save lives, the Kosovo Serbs believe. Officials from the Russian Embassy in Belgrade received the list of 21,000 Serbian residents of the region, who set out their wish to become Russian citizens.

"More than a thousands Serbs have been killed since the arrival of peacemaking forces, even though we stay under the protection of those forces. We are completely rightless, we are on the brink of extinction. The parties that support the recognition of Kosovo's independence now appear even in Serbia. That's why we created the list of those who want to obtain Russian citizenship. We delivered the list to the first secretary of the Russian embassy. We have not received the answer yet, though. We see Russia as our only protection and savior,"  Zlatibor Djordjevic, a spokesman for the Old Serbia movement said.

This is not the first action of the kind. Last year, the people who initiated the petition, addressed to Russian Ambassador Alexander Konuzin. The ambassador showed no interest in it, though. Now the Kosovo Serbs give it another try. It is not only the residents of Kosovo, who would like to receive Russian passport. Now it goes about the residents of central Serbia too.

The Belgrade authorities did not leave the petition out of their attention. State Secretary with the Serbian Ministry for Kosovo Oliver Ivanovic harshly criticized the people who wanted to obtain Russian passports.

"I don't believe that it is possible to achieve anything like this. If some people are discontent, it would be much better for them to take part in the forthcoming parliamentary elections and vote for those who is going to defend their interests," the official said.

Assistant Minister for Kosovo Kruna Kaličanin, described a terrifying picture of the genocide of the Kosovo Serbs.

"Fro twelve years, the international community has been trying to silence everything that has been happening. They are trying to underestimate the number of Serbian victims of violence in Kosovo. The authorities of the self-proclaimed Republic of Kosovo take no steps to defend the Serbs that live there," Kalicanin said.

More than 1,000 Serbs have been murdered in Kosovo since June 1999, when the war ended and international forces were deployed in the province, she added.

In 1999, soon after the appearance of KFOR international forces, Albanians shot 14 residents of Staro Gracko village. An Albanian, who was suspected of the crime, was given the benefit of the doubt. A year later, the Albanian shot dead three Serbians, his neighbors, but remained unpunished again. The man, suspected of exploding a passenger bus in 2003, avoided responsibility too. The explosion killed 12 people.

Opposition New Serbia leader Velimir Ilic had a personal meeting with the organizers of the action. "It's such a shame for all of us that our people seek citizenship from any other country. The authorities are incapable of reaching an agreement on the common declaration on Kosovo. They are not capable of doing anything serious. The people from Kosovo say that it seems to them that it is Russia that defends them, not Serbia, so they decided to ask for citizenship," he said.

The initiators of the action and Assistant Minister for Kosovo explained everything clearly. The Serbian authorities have done very little to defend their country fellows. Kosovo Albanians tried to seize Yarine and Brnyak boundary points in violation of international agreements. Serbian law-enforcement structures did not arrive to support the Serbian citizens.

If the points had been taken by so-called Kosovo customs officers, it would have meant that Kosovo's northern areas would be separated from Serbia. The Kosovo Serbs erected barricades and came into clashes with the Albanian intruders and KFOR officers and soldiers, who were on the side of the Albanians. It seemed that NATO made the Kosovo Serbs live under the oppression of the Albanians, who wanted to exterminate them.

What about Serbian President Boris Tadic? He periodically calls upon the West to respect the human rights and pay attention to the mess in Kosovo. It appears that no one listens to him. German Chancellor Angela Merkel called upon the Serbian authorities to remove all parallel power structures in Kosovo.

Russia's Ambassador to the United Nations, Vitaly Churkin, regularly pays attention to the physical threat to the Serbs in Kosovo. Several times a year, Churkin submits draft resolutions to the UN Security Council demanding the end of the violence. The USA and EU countries take the side of the Albanians, so they simply block the resolutions. However, the Kosovo Serbs praise the work, which Mr. Churkin and other Russian officials conduct on the matter.

"It looks like an attempt to put pressure on their own leadership, which does nothing to defend their country fellows. Belgrade does not even resettle the Kosovo Serbs to the Serbian territory. Tadic does not have any politics at this point. As a result, the Kosovo Serbs defend themselves alone.

"In this situation, the Kosovo Serbs see Russia as their last hope and support. They worship Russia in the north of Kosovo now. One may very often come across Putin's photos there. Russia should treat the idea of giving the Russian citizenship to the Kosovo Serbs seriously. This decision requires political will, though. It goes about the international prestige of our country, and we have no right to fail.

"It is possible to give them Russian passports and allow them to move to Russia. Serbs are very good workers. Serbian builders are valued a lot in Germany, Austria, Switzerland and Sweden. Will Russia be able to take proper care of them? For the time being, Russia shows little interest in taking care of its own citizens abroad."