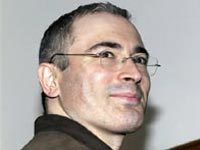 Mikhail Khodorkovsky, the former CEO of oil giant Yukos predicted a revolution in Russia. On Tuesday, the website of Echo of Moscow radio station published Khodorkovsky's answers that he gave to people's question. One of the questions was as follows: "How did you manage to buy Yukos for 350 million in 1995, even though the real price of the company made up 6.2 billion in eight months?"

Here is what Mr. Khodorkovsky said: "This is a myth. The stock exchange quotations of shares in the middle of the 1990s were not reflecting the real state of affairs. In 1998, Yukos cost less than $200 million on the same quotations. As a matter of fact, in 1995, $350 million for 70 percent of the holding that owned 38 percent of branch companies and had the debt of $3 billion was not a very low price. Especially prior to the elections, in which communists had good chances to win."

Someone asked Khodorkovsky about shares-for-loans auctions. According to the former CEO of Yukos, the auctions were just as fair "as it was fair to buy an apartment in Moscow in 1995, even if the price on that apartment could grow by ten or even fifty times by 2003."

"A tax for such an increase of capital could be fair for business, and that's what we offered to the state in 2002-2003. However, well-known people in the Kremlin preferred to keep big business on the hook instead of getting funds for the state budget," he added.

This is wonderful, of course, but why did those things occur to Mr. Khodorkovsky and his colleagues only seven or eight years after they bought their "apartments?" Has it become obvious to them that they would not be able to use the "apartments" for nothing when Putin came to power?

Khodorkovsky received many questions about the future of Russia.

"I am afraid that the country will see many years of standstill. There will be a political crisis and the revolutionary (and bloodless, I would like to hope) change of power, he said.

As for the revolution, this has been a favorite subject for discussion in the camp of the non-system opposition after the revolutions in Tunisia, Egypt and Libya. Indeed, this is a popular topic among nationalists and liberals. There are not many of such sentiments in the camp of the leftist forces. It is worthy of note that Khodorkovsky refers to himself as a social liberal.

Khodorkovsky believes that Russia should refuse from the imperial ambition and concentrate on building a nation state instead.

"Russia is ready to become a nation law-governed state of the European type. The most important aspect here is culture. More than 80 percent of the population in Russia refer themselves to the Russian culture," the former CEO of Yukos believes

"We are very close to committing national suicide. The attempts to preserve the empire instead of building the nation state governed by the rule of law have cost us a lot. We need to urge everyone who identifies themselves with the Russian culture to come to Russia. We need to change the environment for that, to move to the European, pluralistic political model with the division of authorities and with influential opposition," he said.

The swiftness of thoughts is very impressive. One the one hand, Khodorkovsky calls himself a social liberal. On the other hand, would Mikhail partake in the "Russian march" if he had such a chance?

No country in Western Europe (one shall assume that Khodorkovsky offers to line up with Western Europe) falls under the definition of the nation state. There can be some elements of it found, of course, but not more than that.

Does the former CEO of Yukos offer to follow the example of Romania? The national character of this country is defined in its constitution. If so, it may only mean that Mr. Khodorkovsky aims very low.