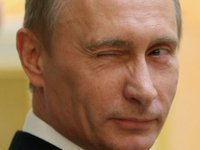 The majority of Russians have treated Putin's decision to take part in the presidential election positively. The siting head of the Russian government may officially run for president as a candidate from the ruling United Russia Party. All the legal issues will be regulated at the end of November, when the pre-election campaign starts.

It goes without saying that the prime minister will be the primary figure and favorite in the pre-election race. Both scientists of politics and other potential candidates will obviously agree with that.

As for the voters, the majority of Russians are not going to leave the country, as some opposition activists say. Many people said that they approved the exchange of places between Putin and Medvedev. A recent opinion poll conducted by the All-Russian Public Opinion Research Center, said that the attitude to Putin and Medvedev has not changed after the announcement. This opinion is shared by 60 percent of the polled.

The Public Opinion Foundation said nearly the same - 55 percent of its respondents said that they did not have anything against Putin's intention to run for president.

The Russians say that they trust Putin and that they do not see any other candidate. Many people said that they were used to having Putin as the leader.  People notice positive changes that have happened in the country during the recent years. Many of them say that the changes became possible because of Putin's work. The respondents said that they think of Putin as a responsible, experienced and confident politician.

The adversaries of Putin's candidacy are in the minority - 21 percent. They presumably repeat the things that opposition activists say. They are particularly concerned about the way the power was delegated from one person to another and say that it was a non-democratic method.

Dmitry Medvedev explained, though, that the practice of reaching agreement between potential candidates representing one political force was previously used by other politicians in the world. As for the predeterminacy of the elections, Medvedev said that it was objective reality. In addition, he said, the people will have the right to choose between the candidates who will take part in the vote.

Some other people say that Putin has been staying in power for too long. They compare him to Brezhnev. Putin's press secretary Dmitry Peskov stated that such an opinion could be shared by those who knew nothing about Brezhnev. "Brezhnev was not something negative. He was a huge plus for our country," Peskov said.

Like several years ago, the majority of Russians associate Putin with stability, which, as Putin said, was not a synonym of power. Russia, he said, would continue to move forward, but it would definitely not remind shock therapy.

"The changes are obviously needed, and they will be happening, it will be an evolutionary development. We do not need great disasters - we need great Russia. We will be acting very cautiously, strengthening the fundamental grounds of our political system," Putin said Thursday during VTB Capital investment forum.

Putin also said that the state would not substitute business in the economy. "It seems to me that both myself and sitting President Dmitry Medvedev have sent a clear message to the nation. We are not going to destroy anything. We are going to develop our political system, but we want to strengthen its fundamental grounds. Everything was destroyed during the 1990s, so we are supposed to put an end to the destruction now," the prime minister said.