Russia pays its debts and forgives billions to other countries 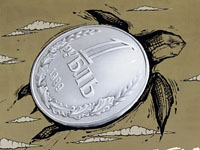 Russia has completely repaid the debt of $185.7 million to Europe's largest creditor - Croatia. Moscow is expected to fully repay its debt to the countries of former Yugoslavia (Serbia, Montenegro, Macedonia, Bosnia and Herzegovina) before 2016.

It is worthy of note that Russia continues to repay its debts to foreign countries at the time when it writes off the debts of foreign countries to Russia. It would be enough to remember how Germany made Russia pay $30 billion of debt, including $6 billion to the former GDR. One can witness the same situation with all of Russia's allies on the left block.

The debt to the countries of the Council for Mutual Economic Assistance dropped from $2.6926 to $2.106 billion during that time. The list included Russia's debt to the Czech Republic in the amount of $100 million, which was fully repaid in 2007, and the debt to Romania - $200 million.

As of May 1, 2011, Russia's foreign debt was evaluated at $38.832.8 billion. The lion's share of this amount (29.82 billion) is the debt on European bonds. Russia continues to borrow funds during the times of the ongoing crisis, but no one is going to forgive Russia's debts.

On April 22, 2010, Russia started making borrowings on foreign markets again, after a break of 12 years. It goes about the amount of $5.5 billion (two tranches of Eurobonds). However, it appears that Russia is so wealthy that it can afford to bid farewell to tens of billions of dollars.

This totals $76 billion. It appears that Russia is so rich that we, unlike the West, can afford doing such things. These are not all the details that reflect Russia's indiscriminate forgiveness. It is not ruled out that the same may happen to Cuba's debt - $19.5 billion.

Many of those countries are rich with natural resources. However, what did Russia get from such countries as Iraq in return? A handful of highly unprofitable offers and that was it.

Appendix 59 to Budget-2007 said that the Russian government was entitled to write off the debts to 13 poorest countries (Guyana in Latin America and 12 African countries - Congo, Ethiopia, Guinea, Guinea-Bisau, Mozambique, Zambia, Madagascar, Tanzania, Benin, San Tome and Principle Island, Burundi and Chad) which made up the total of nearly one billion dollars.

The majority of those countries are rich with oil, uranium, copper, etc. However, Russia received no good contracts for those resources instead. This may only lead to negative consequences for Russia because the country suffers considerable financial losses.

Many countries of the former USSR (Uzbekistan, Ukraine, Belarus, Tajikistan, Kyrgyzstan, Georgia, Moldova) owed Russia $3.294 billion in the beginning of 2006.

Is Russia wealthy enough indeed to refuse from tens of billions of dollars? Russia's internal state debt increased from 778.5 to 875.4 billion rubles. The line in the document about household deposit compensation was left unfilled: the amount of this debt has not been evaluated officially yet.

Russian official say that debts hamper the development of commercial and economic ties between countries. One may have an official approach to this problem. The debt and the pressure from a creditor may only boost the development of those ties. Many developing states are rich with natural resources, so they could successfully repay their debts with those resources. If they could not, then they would have to repay their debt plus interest to Russia, as international laws stipulate. France was waiting for a hundred years for the debts of tsarist Russia to be repaid. Why couldn't Paris just write those debts off during the Soviet era?

The French strongly refused to forgive the tsarist debt. The legal entity in the face of tsarist Russia, which borrowed money from France, stopped its existence. The USSR, which replaced tsarist Russia, refused to even say a word about it. The French could have written off the debt after the collapse of the Soviet Union. However, Russia fully repaid the tsarist debt to France.

Nowadays, it seems that Russia is ready to write off the debts of all of its debtors. "What can you have from such a poor country as North Korea?" skeptics may say. We would like to remind everyone here that the news about the debt forgiveness to North Korea was announced simultaneously with Russia's agreement to lease  200,000 hectares of land to North Korea  in the Amur region. The price is astonishing: 50 rubles ($2) per hectare. To crown it all, Russia will deliver the humanitarian aid of 50,000 tons of wheat to Pyongyang in August-September of this year.

World prices on wheat made up $267 per ton in July of this year. It just so happens that Russia is spending $13.35 million on the humanitarian aid to Kim Jong-il. Russia could use this to gain access to North Korean non-ferrous metals. However, there is nothing to prove that Russia is going to receive anything in return.