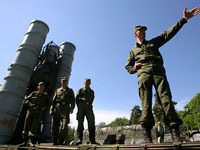 Now Tehran is taking Moscow to court for a default on the contract signed by the parties in 2008. The representatives of the Russian authorities had the following response: "Given the traditionally amicable bilateral relations, it cannot but cause surprise that our Iranian partners have chosen this way," said official representative of the Russian Foreign Ministry Alexander Lukashevich.

According to him, Moscow would prefer a joint search for ways to resolve the dispute through a direct dialogue. However, news agencies quote another statement of Lukashevich that suggests the unchanged Russian position on the implementation of the contract S-300: "The fulfillment of the contract by the Russian party was deemed impossible due to the adopted resolution 1929 of the UN Security Council and Presidential Decree 1154 of 22 September 2010."

Meanwhile, the Iranian side does not consider the situation particularly tragic. As stated by Iranian Ambassador Seyed Reza Sajjadi on August 24, "The Islamic Republic has quickly closed the gap in their defense from other sources." However, the details were not disclosed.

But there is more to it. In recent months, the story of the development of the Iranian gas fields by Russian companies seems quite strange. This gave some experts reasons to speculate that the failure of the S-300 contract will have far reaching consequences for Russia in implementing projects in the oil and gas industry.

Rajab Safarov, General Director of the Institute for the Study of Modern Iran: "Iran does not undertake any unfriendly steps against Russia, as Lukashevich suggests. It is Tehran that had every reason to believe that this was an unfriendly step in its direction and take offense. After all, it had to do with the supply of extremely important in terms of defense products.

In addition, Russia could tell in advance of this decision through diplomatic channels so that the Iranian side would be ready for this, but it did not.

But even in the position when Moscow broke the contract that did not fall under the UN sanctions, Tehran, by contrast, tried to help it fulfill the agreement and save face. What does Iran's claim for the international arbitration mean? It means that if Russia's actions are recognize as wrong, it would have to, according to the international law, fulfill the contract, and everyone will be happy.

Iran understands that failure to comply with the contract for the supply of S-300 was due to the fact that Moscow was caught in between all sorts of interests in the West and that it did not want to do that, but had to do it because of various circumstances, and above all, the respect for its partnership with the West.

Iran's appeal for the international arbitration creates an opportunity for Russia to avoid pressure from the West, to maintain its reputation not only in the eyes of Tehran, but the entire world. After all, it's not only Iran. With its actions, Russia has shown itself as an unreliable and non-independent partner that cannot fulfill agreements unsatisfactory for the third party.

I would like to draw special attention to the fact that the terms of the contract were beneficial in the first place for Russia that could get much more than a billion dollars for these units, since we inevitably talked about further military cooperation, including the supply of spare parts, additional maintenance and so on.

As for Russian companies experiences difficulties in the Iranian market, this is not true. There is an impression that they are not willing to develop gas fields and invest money in them, fearing the American sanctions. Again, Iran is making a move towards Russia. This is despite the fact that there are other international partners that would love to obtain certain desirable areas. Iran is giving Moscow time to think and change its mind."

Alexander Khramchikhin, deputy director of the Institute of Political and Military Analysis, "Most likely, the observed problems with the oil and gas projects in Iran are related to the disruption of the contract for S-300. The specifics of work with these countries should be taken into account. In any case, they will not leave this without consequences. They will do it in a way that one may get an impression that the Iranians have nothing to do with it as it is us who refuse to work.

As for the situation with the breach of the contract on the S-300, Russia had to understand that this will have extremely negative consequences. In 2010, the UN Security Council has imposed weapons sanctions on Iran for its unwillingness to stop its nuclear program. However, they dealt with offensive weapons, and there is no mention of the means of defense.

The Iranian leadership because of possible conflict with the West and Israel is trying to prevent a negative scenario development and to strengthen its own air defense. Russia's failure to fulfill the contract put Iran's security into question. After all, in fact, the meaning of Russia's actions in relation to the breach of the contract on the S-300 has to do not only the desire to achieve favorable conditions for the conclusion of START-3, but also to please the West.

It was foreseeable that it would not go unpunished. Moreover, that international law in case of failure of the signed contract is the basis for litigation and compensation. As for the prospects to meet Iran's claims, I think Tehran is well aware that the chances are slim, and the main goal here is to punish Russia, showing it to the entire world as unreliable.

In addition, Tehran's statements to the effect that it found the replacement for Russian S-300 may not be a bluff, given that last year at a parade it showed units remarkably similar to "S-300." I see two main ways through which Iran could obtain these complexes: China and Belarus."

Ivan Rodionov, a professor at the Higher School of Economics: "With regard to Iran filing a lawsuit, this is compliant with the principles of the international law. Making a deal with Iran in 2008, we knew that in the event of its failure Tehran could file a claim with the International Court of Justice.

As for the difficulties in joint projects on gas, then, of course, in order to work in Iran without problems, it is necessary to maintain political connections with its leadership. Here it is unlikely to do with some restrictive actions of Tehran. Yes, it wants to protect itself from certain risks and puts forward its conditions for foreign companies wishing to operate in its market. These conditions include providing proof of cash reserves. For the most part the problem with the implementation of joint agreements on the development of gas fields are due to the actions on our part.

The leadership of Russian companies in light of the difficult situation in Iran perceives the risks and is afraid of investing heavily. In turn, the Islamic Republic is also aware of its significance as a potential gas supplier to Europe, and therefore it will seek to extract maximum benefits from the exploitation of its gas fields.

As for the consequences of the breach of the contract for Iran itself, I do not think that it is so critical. It does have ways to get similar products. First, S-300 technology was developed in the 1970s, and for the booming Iran with its strong industrial and scientific base, they can be readily available.

Given this, it can be assumed that Tehran does not expect to receive a financial compensation for a broken contract, or somehow punish Russia. For them this is an additional opportunity to demonstrate its relevance and to show that they can talk on equal terms with the big powers."