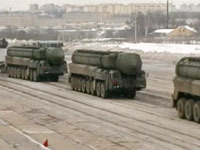 Russia's Defense Ministry reported about the progress in the domestic missile industry. First and foremost, the first missile regiment has been rearmed completely with state-of-the-art Yars mobile missile systems. Secondly, Russian engineers have developed Liner sea-based strategic missile. The new missile is said to be twice as more powerful as the Bulava missile, which had a number of failures during test-launches.

Officials from the ministry said that the first missile regiment armed with latest Yars missile complexes was on full duty. The complexes are equipped with RS-24 thermonuclear intercontinental ballistic missiles. The missile was developed by engineers of the Moscow Institute of Thermal Technology under the guidance of academician Yuri Solomonov. The missile has been created with the use of technological solutions used in Topol-M systems, which significantly shortened the terms and costs of the production.

The missiles are capable of breaking through any air defense system during the upcoming 15-20 years, Sergei Karakayev, the commander of the Russian missile troops said. This remark is especially important against the background of the current dispute between Moscow and Washington regarding the creation of the missile defense system in Europe.

The sea-based Liner strategic missile, the tests of which started successfully with the launch on May 20, is capable of carrying from nine to twelve warheads. Thus, Liner is more powerful than Bulava, specialists of Makeyev's State Missile Center said.

The Bulava missile can carry only six low power class warheads, whereas the Liner is capable of carrying 1.5-2 times more. Engineers also said that the Liner missile can be equipped with warheads of different power classes.

The Liner missile surpasses all modern solid-fuel strategic missiles of Britain, China, Russia, the USA and France. The military equipment of the missile (four medium power class warheads) is comparable to the US Trident-2 (also four warheads).

It is worthy of note that Russia's Defense Minister Anatoly Serdyukov approved the start of the serial production of Bulava missiles in the beginning of July. The missiles are to be deployed on board Yuri Dolgoruky submarines. The Yuri Dolgoruky sub performed a successful launch of the Bulava missile at the end of June. The Bulava will make the basis of the perspective group of strategic nuclear forces of Russia before 2040-2045.