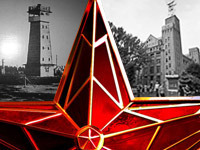 Why did Russia set up a joint historic commission with Latvia? This question was asked by many when the commission was formed, and the same question arises today, after the revelations of the Latvian academic Inesis Feldmanis, co-chair of the Russian-Latvian Commission of Historians established in December 2010 by the presidents of Russia and Latvia.

According to Alexander Chubaryan, the director of the Institute of the World History titled the Russian co-chairman of the commission, it was created to discuss controversial issues in history. It was particularly important because such commissions exist with Lithuania and Estonia.

However, they are not that useful. The first such entity was formed with Lithuania. However, the latter is not going to forget about "the damage from the Soviet occupation." Moreover, from time to time it reminds Russia about it, citing multibillion astronomical sums.
However, some of the journalists still cherished the dream that fellow historians would be able to reach consensus on the issue that the politicians were unable to solve: "did the Soviet Union occupy the Baltic States or were they annexed peacefully?"

With regard to Latvia, two joint historical meetings were held that also did not result in the disappearance of the claims. Chubaryan expressed hope that "history will not be held hostage to modern politics", saying that "we must rid the historical science of political influence to ensure that politicians are not basing their findings on the historical material." He predicted that the dialogue with his Latvian colleagues will not be easy, particularly with respect to collaboration. Estonia and Latvia gave the Nazi the entire elite SS division, as well as many protective and punitive battalions that became notorious for massacre of civilians and prisoners of war not only in the Baltics, but also in Leningrad region and Belarus. For the Balts they are fighters against communism, for the Russians they are executioners who cleaned up the occupied Soviet territory for the "true Aryans". In this regard, many in Latvia tend to consider Salaspils that the Russians consider a children's death camp, a "labor camp".

Of course, with this approach it is very problematic to develop a joint perspective. Moreover, the Baltic countries and Russia have completely different visions of other historical moments, in particular, the events of 1939-1940, which Vilnius, Riga and Tallinn interpreted as "the Soviet occupation of the Baltic states." No less urgent is the topic of mass evictions of local communities to the area behind the Urals in 1940-1941 and after the war. The Balts tend to consider it not merely as a "Red Terror", but often as the "genocide on an ethnic basis." However, the first people to be shot and then deported were not the local "bourgeois nationalists", but the Russian Old Believers, as well as those from the White Army.

It is also not entirely clear how to bring together the parties' positions on the actions of the Latvian Red Riflemen who were true Praetorians of Lenin and saved the Soviet republic on the very moments when the situation seemed hopeless.

Finally, on July 27 the Latvian mass media spread the new statement of the chairman of the Latvian Historical Commission Inesis Feldman that Riga does not want to consider the historical events of previous centuries, which Moscow is seeking.

The Latvian newspaper Neatkarīgā rita avize cites a fragment of his statement: "My principle is the need to try to cooperate, if possible. If the commission fails, then we will not work. In late June - early July in the correspondence with the Russian side a desire to consider other centuries was voiced. But we do not want other centuries! "

The issue, however, is fundamental. After talking about tens of billions of dollars in damage from the "Soviet occupation," the Balts are trying to ignore the fact that Russia has done for them during the 18 thand 19 th centuries. It is sufficient to recall that Peter the Great took undeveloped ruined Latvia from the hands of the Swedes, whereas at the time of the creation of an independent Latvian state, proclaimed in 1918, the country had a strong industrial base and port, built on the Russian money. It is an indisputable fact that all this infrastructure was built by the Russian Empire.

Is it surprising at all that Feldman does not want to consider such "trifles"? After all, if you were to calculate everything that Russia built for Latvia, it could easily exceed the requested amount for the Latvian Soviet occupation.

Another interesting fact is that Feldman's position is not shared by all Latvian historians. In Latvia, there are many people who do not mind discussing all the controversial historical moments with Russia. A history professor at the University of Latvia Guido Straube in an interview with Latvijas Avīze subjected the academic's position to criticism. Unfortunately, people like him are not allowed into the commission for obvious reasons.