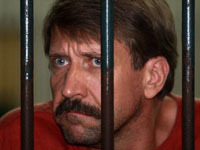 The laws of the United States are applicable for the whole world. US justice is a synonym to world justice. It seems that the United States believes that these affirmations are true. Russia's deputy foreign minister Sergei Ryabkov released an extremely harsh statement today expressing the nation's concerns with the above. During the round-table meeting at the State Duma committee for international affairs, Mr. Ryabkov said that the situations when Russian citizens fall victims to US justice were absolutely unacceptable.

The meeting at the Duma was devoted to defending the rights of Russian citizens and organizations in light of the US-Russian relations.

"We continue to emphasize in our dialogue with US officials that such situations, when a number of Russian citizens fall victims to US justice and US legislative procedures on a extraterritorial basis are unacceptable," RIA Novosti quoted Ryabkov as saying.

Also read: Someone in USA deliberately tries to aggravate relations with Russia

"Undoubtedly, we need to counteract, but we need to counteract with the use of legal methods only. If the Americans are breaking the law, I believe that we must not respond with similar actions," Konstantin Dolgov, an authorized representative for human rights of the Russian Foreign Ministry said. "Being aware of the levels of influence, which American partners have in the field of mass media, there can be no doubts about the fact that if Russia takes such actions single-handedly, the pressure on Russia will continue to grow," the official added.

Nevertheless, the possibilities, which the USA has, does not mean that Russia must refuse from defending its citizens, whom the US decided to try on its territory and under its laws.

The discussion emerged in connection with two notorious litigations held in the United States against Russian citizens. It goes about Viktor Bout, who was charged with illegal arms sales, and pilot Konstantin Yaroshenko, who acts as a suspect in a drug trafficking case. None of the crimes incriminated against them was committed on the territory of the United States. However, US authorities believe that the actions of these two Russian citizens could indirectly endanger the security of the United States. Therefore, both Bout and Yaroshenko were tried on the base of US laws.

Viktor Bout's wife doubts the validity and objectiveness of the trial which is to be held over her husband.

"I doubt that the court process in New York is going to be unbiased, judging upon the amount of the funds invested in propaganda," Alla Bout said at the above-mentioned meeting at the Duma.

Alla Bout presumed that it would be hard for her husband's defense to select unbiased and objective jury for the litigation.

Viktor Bout was arrested in Bangkok, Thailand, in March 2008 at the request from the United States. He was subsequently delivered to the USA in November 2010 despite Russia's protests. Russian Foreign Minister Sergei Lavrov said that the decision to deliver Bout to the USA was "nonlegal and political."

US prosecutors accuse the Russian citizen of illegal arms shipments to the Revolutionary Armed Forces of Colombia, also known as FARC, a guerrilla organization based in Colombia. Does Colombia has anything to do with the case? However, FARC is listed by the USA as a terrorist organization. Therefore, anyone, who is suspected of having any ties with an organization, which the US authorities categorizes as 'terrorist', is supposed to be subjected to punishment. What is more, anyone, whom the USA includes in any of its lists, can be arrested in any country, extradited to the USA and put on trial there under American laws.

All this may only mean that the US authorities believe that the US legal system is the most important one in the world. By that state of things they also assume that the US court is of global significance, whereas US interests prevail over the interests of any other countries.

Bout's lawyer Albert Dayan insists that his client's case has been politically motivated. According to the lawyer, the case violates both human rights and the Constitution of the United States.

As for pilot Konstantin Yarohenko, Russia's claims to the USA are similar. The pilot is facing a term from up to ten years to lifetime imprisonment. US prosecutors claim that Yaroshenko was involved in the plot to smuggle the largest batch of cocaine from Latin America. On April 28, 2011 the jury found Yaroshenko guilty. The country brought down a sentence against Yaroshenko on July 28. He was arrested in the capital of Liberia, Monrovia, where he had supposedly arrived to finish the talks about the contraband of cocaine. No evidence was presented during the trial to prove that Yaroshenko was staying in Liberia to complete the talks, nor was it proven that the drugs were supposed to be delivered to the States.

"Taking into consideration the guilty verdict against Yaroshenko and the fact that the legal framework was entirely built on telephone interception, rather than real actions, I can not predict that we will be able to achieve a positive result at this point. One should look for alternative ways of showing influence on the American side, and we are in the process of doing that. Certain steps will be taken in the near future," Sergei Ryabkov, deputy foreign minister of Russia said.

It is extremely important that Russian diplomats realize the importance of the problem. One should give the Americans a slap on the wrist before they decide to arrest Russians in Moscow.