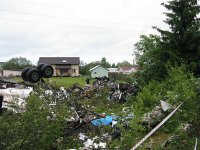 Russian President Dmitry Medvedev ordered the government to study an opportunity to take regular flights of Tu-134 passenger planes out of service.

"I ordered the ministry to prepare the removal of the Tu-134 from operation. It is about time we should do this," Medvedev said.

A Tu-134 jetliner of RusAir airline crashed on Tuesday night near the airport of Petrozavodsk, in Russia's north. There were 52 people on board the plane, 45 of them died in the crash. There were foreign nationals among the passengers: one citizen of Sweden, one citizen of the Netherlands and two citizens of Ukraine. There was also a family of four holding dual US-Russia citizenship, Vesti.ru reports.

Russia's EMERCOM awarded 12 volunteers for their invaluable help that they provided during the operation to rescue the survivors of the crashed jetliner. They are mostly the people who lived in the houses near the crash site.

According to Dmitry Medvedev, many airlines in Russia still use Tupolev 134 aircraft . "I've listened to the report from the minister for transport. He said that airlines do not use a part of the planes that they own, although those planes were not taken out of service," Medvedev said.

The plane that crashed in Karelia, had been flying for 30 years. The first flight of the plane took place on May 7, 1980. The Inter-State Aviation Committee said, though, that the engines of the crashed aircraft were working right till the moment when the plane hit the ground.

The Tupolev Tu-134 is a Soviet twin-engined airliner, similar to the American Douglas DC-9 and the French Sud Aviation Caravelle. The model has seen long-term service with some 42 countries, with some European airlines having scheduled as many as 12 daily takeoffs and landings per plane. In recent years, a number of Tu-134s have been converted for use as VIP transports and business jets. A total of 852 Tu-134s were built of all versions (including test bed examples) with Aeroflot as the largest user; by 1995, the Tu-134 had carried 360 million passengers for that airline. The Tu-134 was the first Soviet airliner to receive international certification from the International Civil Aviation Organization, which permitted it to be used on international routes.