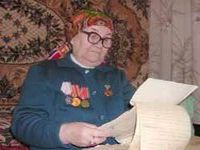 The events in Lviv on May 9 have caused a wave of indignation over the attitude towards the veterans. However, the situation in Russia is not much better. In Russia, the veterans are offended not so much by words but the attitude. Once a year they are honored as WWII participants, and the rest of the time they are forced to languish in poverty.

The 66th anniversary of the Great Patriotic War has broken all records in terms of the number of scandals. While Russians are angered by the "actions" of Lviv nationalists, in Voronezh a 87-year veteran Vasily Zasorin sent to Moscow a package with all his military awards.

This was the war veteran expressed his attitude to the authorities who do are not willing to allocate adequate housing for him. Now the retiree lives in a ramshackle house with no water, gas, heating or sanitation.

"Of course it is hard to give the medals away. There was so much blood and sweat put into them, I am sorry, but what can you do. When I was young they needed me, and now I live in a house without heating," said the veteran to "Vesti".

However, Voronezh officials felt that the veteran does not need a new home since the area of ​​his current residency in the village of Elan-Koleno is greater than 11 square meters, which in Voronezh region is the main criterion when deciding on the housing provision. Zasorin lives by himself on the area of 43.9 square meters.
When Prime Minister Vladimir Putin intervened, the officials said that the veteran could not get new housing under the law, but his current housing would be repaired. Zasorin and his family refused this "gift".

According to the veteran's daughter, the house was built after the war "from twigs and wire nails." To repair it they would have to remove the roof, and Zasorin who can barely move has nowhere to go.

The saddest thing is that this case is not the only one. There are many people in the country who have gone through the war and now receive occasional help from the authorities on holidays.

In Kabardino-Balkaria a criminal case against two officials in the village administration, who also felt that the veterans are not allowed new houses, is currently being investigated.

In February of 2010, two employees from the housing commission examined the house of the 90-year-old war veteran and came to a conclusion that he was unworthy of subsidies for the purchase or construction of housing.

Six months later, the staff of a district office felt that those employees were incorrect in their judgment and the veteran and his family of eight people needed to improve their living conditions. Unfortunately, the veteran did not live long enough to see the help.

We can only guess how many similar stories remain unknown to the public. After all, not all veterans have the strength and health to fight for their rights. Lonely and sick resign themselves to the arbitrariness of local officials, and live their lives in poverty and oblivion.

Another example of "honor and respect" to the veterans is  the story that occurred in Krasnodar region, where an 89-year participant in the Battle of Kursk on Victory Day was given 200 rubles ($7) and a broken set of dining plates. The veteran's wife told media that a representative of the trade union from the organization where her spouse worked at for over dozen of years came to their house on May 8. The guest congratulated the veteran on the occasion, presented a cardboard box, two hundred rubles, and hastily retreated. When they opened the box and saw broken glass, her husband felt sick.

The union representatives kept apologizing when the story came out, but it does not change the facts. It seems that accusing Ukrainian youth for unspeakable contempt and cynicism, Russian people forget that those who live in glass houses should not throw rocks. It would not be surprising if in a year or two the attitude towards veterans observed in Lviv this year would be the same in Moscow or other major Russian cities. The only question is who will be to blame.