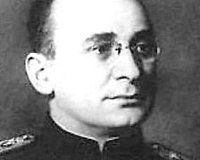 Lavrenty Beria, a high-ranking and blood-thirsty statesman of the Soviet Union during Joseph Stalin's era, shared very interesting stories in his diaries. Beria particularly wrote about the things that were happening in the Soviet administration several years before Stalin's death and immediately after the epoch-making event. The last record, which Beria made in his diaries, is the following: "I am sorry for people, but we'll have to shoot."

Lavrenty Beria's diaries are expected to be published in Russia. They have been prepared for publication by historian Sergei Kremlyov.

The newspaper published the third part of Beria's diaries, which he wrote in 1949-1953. During the post-war period, the chief of the Soviet secret police was writing a lot about his control of the program to build the nuclear industry and nuclear weapons in the Soviet Union.

For instance, in August of 1949, Beria wrote that Stalin doubted whether scientists could achieve anything in the field. However, successful nuclear tests made Stalin change his mind. The chief of all nations ordered to award everyone. Beria was decorated with a Lenin Order for administering the tests of the nuclear bomb. He also received a certificate of merit and gratitude from Politburo. Beria complained in his diary that Stalin had not decorated him with a second star of the hero of the Soviet Union.

"He doesn't want to give it. Everyone has only one star. If I had another one, it would give me more honor. People would know me more and remember me longer," Beria wrote.

In July of 1950, Beria proudly wrote that the Soviet people had built a lot during five years after the Great Patriotic War.

"I'm really surprised myself! Our people can move mountains! And they move them!" he wrote.

"I asked him whether he was going to launch a man into space. He laughed and said that he needed time for that. He said he would send a man into space some day," Beria wrote.

In January of 1953, Beria mentions the so-called "doctors' case" in his records. It is clear from his writing that Beria was certain that the people involved were guilty.

"It's not about the doctors really. It's about negligence - that's what important. Negligence leads to destruction and irresponsibility. That leads to treason and direct execution of enemies' tasks," Beria wrote.

The investigation of the "doctors' case" began in 1948, when doctor Lidiya Timashuk paid KGB's attention to suspicious methods of treatment used for Andrei Zhdanov. The methods supposedly resulted in Zhdanov's death. In January 1953, the case was given a full throttle. All the suspects were fully acquitted and relieved of persecution after Stalin's death.

Beria did not write anything about the period when Stalin was dying. On March 8, 1953, three days after the chief's death, Beria wrote the following:

Historian Sergei Kremlyov does not think that Beria stopped writing because of the state of shock that he was in. Most likely, he just started thinking how his life was about to change and closed the diary.

In his last record dated from June 17, 1953 Beria wrote about strikes in Germany.

"Our stupidity, their provocations, and one has to shoot as a result. I am sorry for people, but we'll have to shoot."

On June 26, 1953, Beria was arrested on charges of espionage for Great Britain to overthrow the Soviet power. On December 23, 1953, Beria was sentenced to death penalty. He was executed the same day.