The 9th of May 1945 -- The Union of Soviet Socialist Republics defeated the worst scourge the world had ever seen and, in so doing, made the most tremendous of human sacrifices. Almost twenty-seven million Soviet men and women gave their lives selflessly fighting the fascist and racist tyranny unleashed by the German Nazi war machine across the European continent and beyond.

Eight of every ten German soldiers were killed on the Eastern front in epic battles which (the infamous Stalingrad and Kursk for example), apart from the enormous human loss, devastated almost 2,000 Soviet cities and towns, 70,000 villages and hamlets, 84,000 schools, 60,000 kilometres of railroad, 40,000 hospitals, 43,000 libraries, 32,000 industrial plants and 2,500 churches.

The industrialisation programme launched by Stalin gave the country the capacity to produce more tanks than the rest of Europe combined. Factories were moved eastward, producing war materials 24 hours a day, seven days a week. 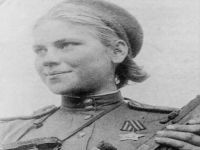 Even after losing around half its industry in battles, the USSR was, by 1942, producing over five times more tanks than Germany. Furthermore, the industrial model adopted in the Soviet Union was one in which civilian plants were easily adaptable for military production.

The siege (blockade) of Leningrad lasted for 900 days, from September 8, 1941 until January 27, 1944. Almost 3 million civilians, including about 400,000 children, refused to surrender to German butchery and endured horrendous hardships in the totally encircled city.

Food and fuel were in extremely short supply, public transport was not operating and by the winter of 1941-42 there was no heating, no water, almost no electricity. Food was very scarce and people were starving to death. 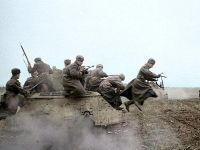 It is estimated that during the siege that 641,000-800,000 people died. Most of them were buried in mass graves, the majority in the Piskariovskoye Memorial Cemetery, an imposing, quiet holy resting place to over 500,000 people and a timeless, haunting reminder of the heroic deeds of that hero city.

Few in the west have the proper appreciation for the Soviet war effort. However, they cannot detract from the reality. In the final battle alone, Soviet casualties were three hundred thousand with seventy five thousand killed in action.

On this 66th Anniversary, we honor and venerate the war heroes of the Soviet Union to whom we are forever indebted.

We find ourselves again faced with the same evil forces of fascism wreaking death, havoc and destruction in various places such as Libya, Afghanistan and Iraq. Hopefully, these forces will be met, turned back and defeated by...the children, grandchildren and great grandchilren of that great generation of selfless, courageous heroes. 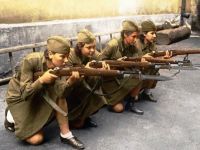