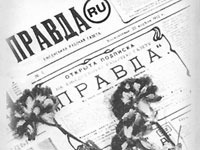 Russia marks the Day of the Press. On April 22, or May 5th on the new calendar, 1912, the first issue of newspaper Pravda saw the light. Pravda appeared as a publication of the Russian Social and Democratic Working Party of Bolsheviks. This is a special date for Pravda.Ru too, because we are a publication, the history of which originally started on May 5th 99 years ago.

The history of the newspaper Pravda counts a little bit less than 100 years. During the pre-revolution era, the newspaper existed both legally and illegally. The publication was struggling for the title of the central press organ of the Bolsheviks. In the summer of 1917, the paper was banned by the Interim government, but continued its existence under different names. After the Great October Revolution, the newspaper was published as Pravda again.

During the Soviet period of the Russian history, Pravda became the primary newspaper of the state. Unlike any other publication, the Pravda had a right to publish and comment the decisions taken by the Soviet administration. The Pravda archives still remain a priceless source of information for historians.

Pravda also became an agency of state control. Critical materials would inevitably lead to administrative and court penalties. Local correspondents would simply be killed to conceal the real state of affairs from the central administration.

From the modern point of view, many functions of the main publication of the Soviet Union look as not typical of the press. Pravda was a newspaper that was only providing information - it was not trying to heal social ulcers of the Soviet society. Pravda was largely an administrative resource. It was funded by the state and enjoyed immense circulations and a huge correspondent network. However, any Pravda journalist would have to risk their lives if they wanted to criticize something and see real consequences of their work. It is hard to imagine that correspondents of the press organ of the Central Committee of the Communist Party of the Soviet Union would be persecuted and killed. It is also hard to imagine and regional authorities would withdraw and destroy circulations of the newspaper. All of that was happening.

A lot has changed during those years, to say the least. Everything has changed. Russia's old publications are going through hard times. Trud, another well-known Soviet newspaper, has recently celebrated the 90th anniversary. However, the newspaper is about to be closed. Another icon of the Soviet press, the Izvestia, is not going to close its doors, but the publication is going to relocate from its historical office in the center of Moscow this month.

There are many publications in Russia, the history of which started during the Soviet times. There are some magazines that were founded before the revolution, and they still exist. Has anything new and noticeable appeared in the Russian press during the recent two decades?

"One could not even imagine during the 1980s of the 1990s that Russian mass media would change so much. The Internet and digital television appeared - this is also a part of the technological breakthrough in the development of mass media. The most important thing, though, is that we have the freedom of speech in today's Russia. However, the traditions of Russian journalism become history slowly but surely. The journalism that was coming from a person and through a person, through their inner world, is dying. This type of journalism was not typical for many countries of the world. Soviet and Russian people loved that type of journalism and one can still feel this love if articles like that are published. Nowadays, we all try to be the first in publishing news stories and adding some comments to them. This is a disadvantage of modern-day journalism."

"The Soviet press was a role model in general. The Soviet press was not oriented on information per se, it was all about propaganda and agitation. Something like a window appeared in the Soviet press some time later. It was the Literaturnaya Gazeta, which offered an alternative point of view on things. Or better to say, the newspaper was reporting about the things that were not published in the official press. The Literaturnaya Gazeta was a unique phenomenon of the Soviet society from this point of view."

"All monsters of the Soviet press no longer exist in Russia. Only the "Komsomolka" is left. There was Pravda, Izvestia and Trud newspapers, and they had multi-million print-runs. This is the first change. The second change is the appearance of Internet journalism. I believe that the talks about traditions in the press is mostly a make-up story, a myth to pacify elderly Soviet journalists. I've worked in the Soviet press for many years, in major national newspapers, and I would not exaggerate the purity of Soviet journalism, its innocence and highest standards. I would not say that we have lost some priceless traditions that we had. We always had outstanding journalists before and we have them now. Nothing has changed for the worse from this point of view, I think."