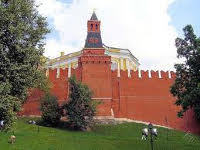 Every Muscovite, and everyone visiting Moscow is very familiar with the problem of traffic jams in the city. Heavy traffic is not the only question, which the Moscow government has to deal with all the year round. The big city is suffering from the lack of public toilets.

Moscow mayor Sergei Sobyanin has recently rejected the idea of his predecessor to install 100 so-called high-tech toilets in the city. Two years ago, Yuri Luzhkov put forward an idea to build public toilets adjoined to advertising constructions. The new mayor decided that it would not be an efficient initiative to pursue.

However, Vladislav Chernyavsky, an official with Sanitary and Technical Department stated that the situation with public toilets in the city was normal. "There are no problems in Moscow connected with the availability and the quantity of public toilets. As for the public toilets alone, one may think that their number in the city is not enough indeed. However, one should also take account of public restaurants and trade centers, in which the owners are obliged to organize and maintain public toilets," the official said.

Judging upon Mr. Chernyavsky's words, one shall assume that the people desperate for restrooms will have to look for a shopping mall or a McDonald's restaurant to answer an urgent call of nature.

Russian news agencies reported at the end of December that many so-called blue toilet booths disappeared from the streets of Moscow together with kiosks. The removal of kiosks and blue booths, or bio-toilets, ended just as quickly as it started, but nothing has changed for the better.

The owners of bio-toilets suffered serious losses, the Noviye Izvestia newspaper wrote. Dismantling a three-section module of such toilets cost them 7,000 rubles ($230), whereas installing new booths would require 250,000 ($8,300).

The Moscow government intends to develop so-called stationary toilets, but the dynamics of this development is not impressive at all. This year, for example, Moscow plans to build only one stationary toilet. There is such a toilet in Alexandrovsky Garden, near the Kremlin. The laser counter installed there counts over 8,000 visits every day.

The absence of 24/7 public toilets is another serious problem. There is about a dozens of them operating in the huge city. Moreover, many people are familiar with the problem when it is absolutely impossible to find a toilet anywhere near. Moscow officials suggested one should mark the locations of public toilets on Moscow subway maps.