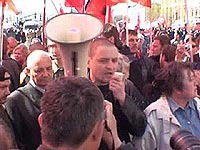 The Moscow authorities have approved the "Day of Wrath" rally. It will be held on February 12 at the Theater Square near the monument to Karl Marx. The organizers of the rally talk about a "great success of the Muscovites".

However, we must stipulate that the approval of the rally was announced by the coordinator of the Left Front Sergei Udaltsov, and as of yet there has not been an official confirmation from the authorities. However, Udaltsov said that the opposition would not hold rallies without reason.

According to him, the Moscow authorities banned the march to the presidential administration building in Old Square, "referring to the fact that the participants in the procession will create obstacles to traffic." However, as stated by Udaltsov, after the rally the procession will still take place.

This event is the rally of one person, the coordinator of the Left Front Sergei Udaltsov. In fact, he copied the idea of Eduard Limonov to hold an event dedicated to a particular article of the Constitution on a certain day of the month. In this case the rally would be dedicated to the 12th Article which guarantees the local self-government.

Udaltsov announced the monthly rally last year. In total there have been seven attempts, all of them in front of Moscow City Hall on Tverskaya Square. The opposition failed to get any of these rallies approved. Although they were regularly offered alternative venues for the meetings, Udaltsov has always rejected them.

The rallies did not have numerous participants, and the organizers have failed to attract more than a hundred people for each rally. Usually they would have five to seven dozen participants and the same number of journalists. In fact, this was the entire point of these rallies.

In general, pretty soon people got used to the "Days of Wrath" at the building of the Moscow government. All rallies involved the same activities: a group of people would gather, someone would light a fire, Udaltsov would give interviews, the police would repeatedly warn that the rally is illegal and call everyone to disperse, those calls would be ignored, then a few very active protesters would be detained while being filmed with photo- and video cameras.

However, sooner or later people must have got bored of it. Each time the "Day of Wrath " at the City Hall would have fewer participants. It was easy to predict what would happen there, how things would go, and how it would all end. As a result, in late 2010 Udaltsov announced that the rallies would be held quarterly. Later it was decided to hold the "Day of Wrath" at the federal level.

This means it would be held not at the City Hall, but as close to the Kremlin as possible.

It must be admitted that "creative ideas" visit the mastermind behind the "Day of Wrath" rather infrequently. This is unless the idea to ask everyone to bring toy megaphones to the rally can be considered creative. Today the organizers intend to revive the idea of "black marks." This is when the protesters bring to the venue an object of black color that symbolizes a "black mark" for the government. Earlier the undertaking did not enjoy great success. The imagination of the most participants was limited to a black bag or a piece of black paper. The organizers decided to give it another try.

Sergei Udaltsov has been trying to hold his "Days of Wrath" for over two years. The first such rally took place in November of 2008 on Triumph Square in Moscow. Incidentally, it was approved by Moscow authorities.

This is the description of the events by a political scientist Boris Kagarlitsky: " . . what I saw on the square killed every desire not only to speak (it was initially ruled out), but even to be there. On a small square in front of a monument to the poet Mayakovsky there was a small crowd of about 200 people, uniting schizophrenics and freaks of all ideological hues - from liberals to fascists, who were freezing under a couple of dozen of red flags [. . . ] Cheerful patriotic songs were played, calling to be like Ivan Kalita and resist the democrats and all non-Russian trash which seized the power and was tormenting the Slavs." It will be interesting to see what has changed over the past two years...