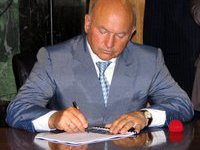 Former Moscow Mayor Yuri Luzhkov, who failed to obtain residence permit in Latvia, promised to return to Russia to continue the struggle against his opponents. For some reason, Mr. Luzhkov decided to "clear his name" only after he visited Britain. Luzhkov shared his plans in an interview with The Financial Times, which was held in Austria's Salzburg.

In the middle of January, mass media exposed Mr. Luzhkov's plans to receive a residence permit in Latvia (a former Soviet republic in the Baltic region). It soon transpired that the former head of the Russian capital had already acquired real estate in the country and even invested quite an amount in the development of one of the local banks.

However, Luzhkov's plans went up in smoke after Latvia added the former Moscow mayor on the black list of those barred from entry to Latvia.

Afterwards, Yuri Luzhkov attempted to try his luck in Britain and asked for a visa at the British consulate. This immediately gave rise to rumors saying that the disgraced Moscow official could stay in Britain for good. The rumors seemed to be realistic especially after Russian news agencies said that an investigation conducted by the Audit Chamber revealed the embezzlement of 230 billion rubles ($440 million) from the Moscow budget during 2009-2010. It is worth mentioning here that one of the reasons that led to Luzhkov's dismissal was an extremely high level of corruption in the capital.

The spending on maintaining Moscow officials (office rent, telephone communication, duty vehicles, etc) was overstated as well, the investigation revealed. Moscow officials would steal on trifles too. Just try to imagine: up to 30,000 rubles ($1,000) were spent on stationary expenses for each Moscow official annually.

The results of the financial audit will be handed over to the Investigation Committee. No one knows, though, whether it is going to lead to any consequences for Mr. Luzhkov and officials from his team.

During the interview with The Financial Times, Luzhkov said that the above-mentioned events were entirely based on a political motive. The opponents, the former mayor stated, were simply harassing him politically.

"If this amount of money was truly missing it would have been easy to spot. This is nothing but an attempt at political bullying. They are trying to stun the public with such wild numbers," he told the newspaper.

"I will stay in Moscow and fight for my honor and name," he added.

A high-ranking Kremlin official told Interfax that the Russian authorities were "not interested in the activities and everyday life of pensioner Yuri Luzhkov."

"Judging upon Mr. Luzhkov's persistent efforts to obtain visas to European countries, one shall assume that the former mayor of Moscow has extensive plans to study the cultural legacy of those countries. Many Russian pensioners can only envy the opportunities which the former mayor has," the source who wished to remain anonymous said.