Zhirinovsky: 'It's all because of Chechnya and Dagestan' 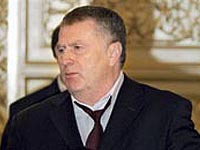 Vladimir Zhirinovsky has yet again found himself in the center of a scandal. This time the leader of the Liberal Democratic Party has voiced his opinion on international relations. His statements were met with a storm of criticism.

The reason was the remarks made by Vladimir Zhirinovsky during a talk show on one of the federal TV channels. The show was dedicated to the topic "Should Russians be protected in Russia?" LDPR leader shared with the audience and viewers his consideration that the problem really lies in the three North Caucasian republics - Chechnya, Dagestan and Ingushetia. This passage caused a harsh reaction. The Chechen Republic was the most vocal of all.

"Russians have long known that Vladimir Zhirinovsky never set out to promote the rapprochement of peoples, achieve international harmony, peace and stability. The entire political career of LDPR leader is built on scandals. And today, feeling that certain forces are trying to oppose nationalities in Russia, he decided to ride this topic and launch his upcoming election campaign with populist statements," says the statement posted on the official site of the head and the Government of the Chechen Republic.

The head of the republic Ramzan Kadyrov demanded that Zhirinovsky is called to account for the threat to the security of the Russian Federation.

State Duma deputies and senators from Chechnya have demanded that Vladimir Zhirinovsky withdraws as vice-speaker of the lower house of the Russian parliament. "We think that provocative threats of V. B. Zhirinovsky about the repetition of riots in downtown Moscow and his hysterical attacks on the peoples of Russia made on a federal TV channel on January 20, 2011, are incompatible with his position of the Vice-Speaker of the House of the Federal Assembly of the Russian Federation," the statement notes.

"Now it is up to the deputy corps of the State Duma of the Russian Federation, the vast majority of which consists of good people, and where there is no place for the party of Zhirinovsky which in fact is neither liberal nor democratic," the statement said.

The deputies of the Chechen parliament went even further. They adopted a resolution which asked the State Duma not only to release Zhirinovsky from his position, but also revoke his parliamentary mandate, and to prohibit political activities of the Liberal Democratic Party in the Russian Federation.

"Just Russia" party also agrees that the statement was made by Vladimir Zhirinovsky for the electoral purposes. "It is clear that in order to achieve more positive results in the election he is actively trying to exploit the nationalistic theme," a member of the State Duma Mikhail Emelianov told the Russian News Service. According to him, it is extremely dangerous to the integrity of the country. "In general, those who defend the nationalist position must understand that the cost of their reckless actions and statement may be the disintegration of Russia," stressed the deputy.

In turn, Valery Ryazansky, the first deputy head of the faction "United Russia" in the State Duma noted that "when Vladimir Zhirinovsky expressed intemperance, indiscretion or extremist statements, the decision on this matter should be made exclusively by court."

According to Ryazansky, the statements of LDPR leader can be attributed to manifestations of "political intemperance, and not to extremism," reported the Russian News Service. "But if members of the Duma make such a decision, then the only solution of this issue is through the courts," he said.

Vladimir Zhirinovsky rejected any claims. "There were no Chechnya-related topics in that TV show. We specifically have not touched on the subject of Chechnya and the North Caucasus," stated the leader of the Liberal Democratic Party.