Khodorkovsky's verdict: Who is putting pressure on the court? 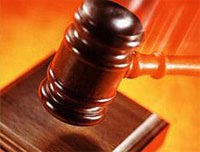 A court of Moscow declared Mikhail Khodorkovsky, former Yukos CEO, and his business partner Platon Lebedev guilty of theft and money laundering charges. The judge, Viktor Danilkin, started reading the sentence on 10 a.m. Moscow time. In accordance with the sentence, Khodorkovsky and Lebedev committed the crimes for their personal enrichment.

"Khodorkovsky, Lebedev, and members of the criminal group managed used the stolen assets according to their own will, mostly for their personal enrichment. The rest of the funds were invested in oil mining and refining enterprises to build the opportunity to continue embezzlements," the sentence particularly runs.

Many were eagerly waiting for the announcement of the sentence to start. Numerous comments from relatives, lawyers and Khodorkovsky's followers appeared in the press during the recent weeks. Some newspapers published a number of articles written by the former head of Yukos. Prominent public figures wrote letters demanding Khodorkovsky and Lebedev should be released immediately.

All those people believe that the only fair outcome of the litigation would be Khodorkovsky's and Lebedev's acquittal. Most of their supporters do not have any knowledge of the materials of the criminal case, but they are very persistent in their claims about the innocence of the two defendants.

Igor Yurgens, the chairman of the administration of the Institute for Modern Development, told the Kommersant newspaper that the only possible verdict for Khodorkovsky and Lebedev would be the verdict of not guilty.

"I am not a lawyer, and my conclusions are more emotional rather than judicially verified, but this is not just my opinion. Such a sentence [not guilty] will satisfy both the business community and the West, in the broad understanding of this word. Russia's potential investors would also be satisfied," Yurgens said.

We would like to remind that Mr. Jurgens chairs the organization, in which Russian President Dmitry Medvedev is a member. Last Friday, Medvedev said in his extensive interview that neither the president, nor any other state official had a right to express their views on Khodorkovsky's case until the announcement of either guilty or nor guilty verdict.

How is it possible that the chairman of the structure, which the Kommersant or the Vedemosti refer to as a "presidential institute," takes the liberty to release such comments?

What about other reports claiming that Viktor Danilkin, the judge, supposedly visited the Moscow City Court to meet the court's administration prior to announcing the sentence on Yukos's second case?

Usacheva strongly rejected the possible interference of the chairwoman of the Moscow City Court, Olga Yegorova, in the ruling taken by Viktor Danilkin.

"She has been working at the court since she was 16, and she is very well aware of the peculiarities of the court system. The law directly forbids interference into administration of justice," Usacheva said.

Several dozens of Mikhail Khodorkovsky's followers gathered in front of the building of the Moscow City Court on Monday. They were mostly human rights activists and members of non-system liberal opposition organizations. The people started chanting "Shame!" and "Freedom!" prior to the announcement of the verdict.

Several participants of the action were arrested because the meeting had not been authorized.

It does not matter, who can and who can not comment Khodorkovsky's case. However, enforcing "the only right" opinion on the matter is not going to contribute to the progress of the Russian legal system. What does the progress have to do with it? Let's quote Igor Yurgens again. He believes that the guilty verdict does not bring hope to further reforms in the Russian court system. This is what the reform was all about, as it turns out.