Putin: Everyone should feel comfortable living in Russia 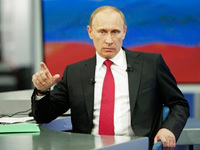 On Thursday, December 16, Vladimir Putin, the head of the Russian government, answered Russian people's questions during a call-in show. One of the questions was about recent ethnic riots in Moscow.

TV host Maria Sittel said that "A Conversation with Vladimir Putin" program received many questions about the subject.

"The government did not respond properly [to Sviridov's death] and this triggered the disorders," Putin said during his annual televised Q&A session. "The people involved in the murder were freed, but this did not give anyone the right to break the law."

"One should cut manifestations of extremism everywhere, no matter where they may come from. One should not paint equally either the people from the Caucasus or the people of other nationalities, although there is no such nationality as Caucasian," Putin said.

The prime minister also spoke about the criticism of the Russian law-enforcement agencies.

"We, with justification, criticize law enforcement agencies a lot, and serious reforms being carried out in this sphere are not accidental. But we should not tar everyone with the same brush," Putin said in his annual Q&A session.

"We should understand that they perform an important duty in the state and we should not humiliate them," he said. "Or otherwise the liberal intellectuals will be the ones who have to shave their thin beards off, put helmets on and go out on the square to fight the radicals," he added.

About criminality in power

According to Putin, one of the motives to abolish gubernatorial elections was the struggle against criminality, which was making its way to power through elections.

"Criminality would appear behind the back of nearly every candidate. The abolishment of gubernatorial elections protects the society against the penetration of criminal elements at least at this top level. As for the municipal elections, the influence of criminality is still preserved there, unfortunately," Putin said.

When asked about former Yukos CEO Mikhail Khodorkovsky, Putin stated that "a thief must stay in prison."

Putin also said that in his assessment of Khodorkovsky's case he proceeds from the fact that his crimes had been proven in court. Putin referred to the case of investment schemer Bernard Madoff, who was sentenced to 150 years in prison for committing similar crimes in the USA. "I think that we in Russia are much more liberal," he added.

Putin also reminded that the chief of Yukos security service (Aleksey Pichugin) was convicted of murder.

"The chairman of the security service of Yukos is in prison for murder. They did not like the mayor of Nefteyugansk - they killed him. A woman did not give them her small premises, which they wanted, - they killed her. They killed the assassin, whom they hired, they only found their brains in the garage," he said. "What, do you think that the chief of security committed these murders on his own initiative?" he said, suggesting Mikhail Khodorkovsky was behind the killings.

"There is court, so let them investigate, this is their work. I proceed from what has been proven in court," he prime minister added.

In 2005, Mikhail Khodorkovsky was found guilty of tax evasion and embezzlement. The prison term on the first case expires in 2011. On December 27, a Moscow court is expected to announce the sentence on the second criminal case against Mikhail Khodorkovsky and Platon Lebedev.

"We all are different, of course. Russia always lived in a way when different confessions could coexist with each other, and - this is very important - they treated each other with respect. When we speak about representatives of the Slavic ethnos living in the Caucasus, we proceed from the fat that they must respect local customs and local culture. The same can be said about all others living in Moscow," Putin stated.

"One should respect the customs and culture of the Russian nation in this case, and law-enforcement agencies must show quick and efficient reaction to all demonstrations of violations of law," the prime minister said.

About the dismissal of Moscow mayor Yuri Luzhkov

During the Q&A conference, Putin said that the former mayor of Moscow was removed from the position, probably, "for his non-sporting behavior."

After discussing the sports subject, a TV host said that the question about Luzhkov's dismissal "was not a sports one at all."

"Maybe he was dismissed for his non-sporting behavior." But this question is not for me," Putin replied.

About the new mayor of Moscow, Sergei Sobyanin

A person asked Putin whether new mayor Sobyanin was too tough in his actions on the position.
"He is not tough, he is establishing law and order," Putin said.

The prime minister added that he trusted the new mayor because he had known him for many years. Putin reminded that during his presidency he had appointed Sobyanin the head of the presidential administration for personal and professional qualities. He also said that Sobyanin served as the governor of the Tyumen region and as a member of the Federation Council. "He was a good chief of the presidential administration too," he said.