Winter Olympics 2014 in Sochi to be disrupted and relocated? 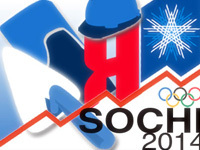 Georgia, a former Soviet state, intends to disrupt the Winter Olympic Games in Sochi in 2014. Georgia plans to prepare an address from Georgian refugees in Abkhazia to the International Olympic Committee. With the help of international organizations, Georgia hopes to prove that the Olympic Games in Sochi may cause damage to the ecological situation in Georgia. It particularly goes about Abkhazia, which Russia plans to have involved in the preparations for the Games, and which Georgia still considers its own territory.

On November 22, David Darchiashvili, a deputy of the Georgian parliament, stated that he was concerned about the fact that the preparations for the Games take place very close to the "occupied" Georgian territories.

"In spite of the fact that there were many examples in history, when the Olympic Games were boycotted, in this particular case it seems very doubtful that they will succeed in boycotting the Winter Olympics in Sochi. But I count on the support of the EU states, which always support Georgia and criticize Russia for its policies against our country," Shota Malashkhiya, the chairman of the interim committee to retrieve the territorial integrity of Georgia said.

Mr. Malashkhiya also described a complex of measures, which Georgia would be ready to take to disrupt the celebration of sports in Russia. The Georgian refugees from Abkhazia and South Ossetia would hold meetings in different countries of the world, the official said.

It is worthy of note that Georgia regularly resorts to the subject of Winter Olympic Games, which Russia is going to host in 2014. Georgia is not the first country that tries to disrupt the major international sports event. Three summer and two winter games did not take place in the past because of two world wars. In 1980, the USA and some of its allies tried to disrupt the Olympic Games in Moscow protesting the USSR's invasion of Afghanistan. The States boycotted the Games, but the event took place. As a result, American, Western German, Japanese and athletes from several other countries were deprived of the medals that they could probably win.

Four years later, the USSR and several countries of the socialist camp boycotted the Games in Los Angeles. It was a purely political measure, of course, but the Soviet athletes did not say "thank you" to the political administration of the country. In 1992, Serbian and Montenegrin athletes were not allowed to participate in the Games because the West accused those countries of unleashing massacres in Yugoslavia.

Disrupting the Games is something that stands out of the trend, though. There were occurrences, when competitions had to be relocated to venues in other countries. However, no one has ever managed to relocate all of the events held within the scope of the Olympic Games. Hosting the Olympics is a very expensive initiative. Even wealthiest states are incapable of doing everything in two or three months. The nearer the opening date of the Winter Games 2014, the harder it gets to relocate the event.

It seems that it will be very hard to disrupt the Sochi Games. It is possible, though, that several Western countries will decide not to send their athletes to the Russian city. However, there will be no total boycott of the Games.

Shota Malashkhiya, the above-mentioned Georgian politician, stated that the Olympic Games in Sochi could be banned for three factors: the factor of security, the ecological factor and the historical factor.

Does the Georgian administration harbor more provocative plans against Russia?

Georgia's Mikhail Saakashvili started the war on the opening day of the Olympic Games in China. If it happens again, the Georgian president will be declared the prime enemy of the Olympic movement. In Ancient Greece, wars would be suspended for the time of the Games. Georgia does not follow the tradition and acts vice versa.

Everything that Georgia can do now is to play mean little tricks. This country is not capable of doing anything serious anymore. One should not completely ignore its actions either, of course, because Georgia finds support with several Western organizations.