Opposition is the prime enemy of Russian democracy 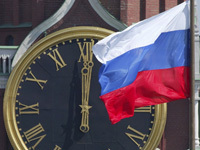 Most Russians believe that the two biggest problems in the country are inflation and alcoholism. Unemployment, corruption, bureaucracy and the living standard follow next on the list of Russia's most acute problems. The Russians are least interested in the issues of democracy, human rights, Russia's national security, the country's international image, extremism and fascism.

A poll conducted by the Russian Public Opinion Research Center, revealed that 56 percent of the polled Russians named inflation as the country's most serious problem. The second most important problem is alcoholism - 53 percent. The list continues with unemployment (46 percent), corruption and bureaucracy (44 percent) and the living standard of the population (42 percent).

The participants of the poll are least interested in the questions of democracy and human rights (eight percent), national security (eight percent), interethnic and interconfessional relations, the relations with the countries of the former USSR, Russia's position in the world (seven percent), extremism and fascism (five percent).

The center conducts such polls for 2.5 years, since March of 2008. The analysis of the studies shows that some problems have become more and some others - less important. One should also take into consideration the economic crisis, which obviously played its role and affected many, if not all, Russians.

It is interesting how the Russians have been changing their attitude to issues of democracy and human rights during the recent 2.5 years. In March of 2008, the issue was named as very important by 19 percent of the polled (every fifth respondent). In October of 2010, the number dropped to eight percent (every tenth respondent).

As long as the Russians do not treat issues of democratic development as most important ones, does it mean that the problem has become outdated?

Judging upon the opinions of Russian oppositionists, the problem is extremely important. Many of those politicians, who stand in an opposition to the Kremlin, believe that Russia has been paving way straight to the authoritarian regime, at least during the recent decade. According to them, Russia's most important problems include censorship, the absence of freedom of meetings, the absence of honest elections (in critics' understanding), etc.

However, the majority of common Russians think that there are many other things that deserve more attention in the country. It is impossible to prove it to them that alcoholism and inflation are directly connected with the absence of the freedom of meetings and censorship in the media. To be more precise, it is possible to do it, but the result will be contrary to that expected.

"People are not indifferent to the condition of the political system and democracy. However, they believe that the modern level of development of democratic institutes corresponds to the level of the economic development, which is not high. The level of the public conscience development is not high either," State Duma deputy Sergey Markov told Pravda.Ru.

According to the deputy, many Russians compare the current state of affairs in the country to the situation of the 1990s. "Opposition-oriented media claim that Putin had turned Russia away from democracy. According to them, there was more democracy in Russia during the 1990s than now. One may say that the prime enemy of democracy in Russia today is the opposition which glorifies the 1990s. Russian citizens support the current situation at a much greater extent as opposed to what they had during the 1990s," Sergey Markov said.

A leading expert of the Center for Political Conjuncture, Oksana Goncharenko, believes that it is the president's reforms that affect the Russians' attitude to issues of democracy.

"They give them the feeling that the authorities are trying to improve the quality of state management and the work of the political system. There is a new initiative to struggle against corruption, to improve the work of law-enforcement agencies, and so on. On the one hand, there is an informational background, which makes people think that the government is conducting reforms. On the other hand, it is too early to expect results to these reforms, many of which are still being prepared," the official said.