Russians' literacy and education only continue to get worse 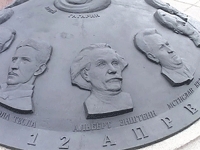 An astounding incident occurred at the celebration of the National Unity Day in Bryansk. Local authorities decided to emphasize proper focus at the patriotic and political course of modern Russia and erect a monument at the Alley of Cosmonauts. The creation of the avenues was widely covered by local media, and its opening was visited by all representatives of the administration. As a result, a plaster prototype (there was no time to prepare the real monument) was inscribed with "Enstein" instead of "Einstein" and instead of "Konstantin Tsiolkovsky" the inscription read "Edward Tsiolkovsky."

The most beautiful thing in this whole story is that a representative of the contractor who manufactured the monument has learnt about the blunders on the monument from journalists. At first he was surprised to learn that Tsiolkovsky's name was Konstantin and not Edward, and then tried to shift the blame on the rain that "washed out" the plaster letters.

He confirmed that the monument cast in bronze was exactly the same, that is, with the same mistakes. Officials refused to comment on this incident, but residents of Bryansk expressed their indignation very readily and eloquently. The only question is whether the firm will listen to the voices of citizens, or because of the costs incurred, will leave everything as is, and Tsiolkovsky will bear the na me of his father, not his own.

Actually, this is not surprising. Recently, it became trendy to erect monuments. One cannot forget the ongoing debate around the monument to Peter the Great authored by Zurab Tsereteli. When the monument was on the stage of planning, it had much more opposition than supporters. It is argued that the monument is historically incorrect and even offensive in its meaning. But all objections were ignored and the monument was erected.

Yet today, when the issue of moving the monument is being discussed again, it has found quite a few defenders. All of their arguments boil down to the fact that the sculpture, of course, is historically inaccurate and ugly, but large. If it is large, it means that its transfer will be expensive. Therefore, let it be.

If this example is known to the entire country, what can we expect from regional sculptors? And what kind of historical accuracy or even basic literacy can we talk about if even Russian central television channels demonstrate illiteracy.

In a hurry to air a story, hosts and reporters often make stylistic mistakes, use wrong accents and inaccurate facts. Advertising signs is another embarrassing topic. And this applies not only to commercial advertising, but even social announcements.

The official signs made by state institutions leave much to be desired. If you read the handwritten signs or those printed by private entrepreneurs, such blunders are countless. That would be funny if it were not so sad.

There has been a long discussion about introducing a law that would punish such public illiteracy. But for now this law is utopian. In contrast, we are observing a growing wave of ignorance and disrespect for the native language and the history.