Putin's bruise is just a game of light 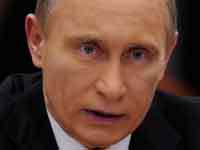 Dmitry Peskov, the press secretary of Prime Minister Vladimir Putin, rejected the rumors about Putin's bruise underneath his left eye. Photos of Putin's apparent bruise covered with a thick layer of makeup appeared on the Internet during his recent visit to Ukraine. Mr. Peskov told the media that reporters were not correct in their speculations. "It was a game of light," the official said. However, he added, "it's true that the prime minister looked very tired on the photos." "He works very hard and he is constantly on the road," the official added.

Many Russian and Western media outlets indulged in speculations last week over the photos of what seemed to be a large bruise underneath Putin's left eye. Some wrote that Putin had had a dental surgery (which often leads to such bruises to appear), an unfortunate judo training session and the like. Others said that Putin was in a bad mood during the meeting with his Ukrainian counterpart Nikolay Azarov, which was probably because of the bruise.

It is not the first time when the media discuss a piece of "sensationalist news." In 2009, many publications and bloggers enjoyed discussing photographs of Italian, French and Russian leaders at the G8 summit. The leaders appeared on the photos in a state of alcoholic intoxication. Afterwards, foreign photographers explained that the pictures depicting bizarre facial expressions of the three politicians had been taken in a high-speed mode.

It is curious, of course: instead of analyzing nearly ten agreements, the publications, which position themselves as respectable business press, pay so much attention to the face of the Russian prime minister. However, when the press is being so enthusiastic about every minute detail or gesture of a politician, it means that the politician in spotlight is a very popular one.