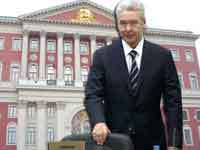 Moscow, and, most importantly, government officials and business leaders, are eyeing the new leader with interest. He presents not only a threat, but also new prospects. Any new broom sweeps clean, and this broom, among other things, is a stranger. We will start with the "strangeness" factor.

Real estate in Moscow, among other functions, has an important architectural component. Old Mayor was cursed plenty for changing the face of Moscow and the demolition of old buildings, but we cannot fail to recognize that in nearly twenty years, Moscow has not changed fundamentally, Moscow remained Moscow. One way or another, but Luzhkov and his team approached the alteration of the city in a cosmetic way. This is because they were local and understood where and how the face of the city is shaped.

Sobyanin is foreign to the capital. He is foreign to its architecture and related traditions. He will be bold and even carefree in making decisions on demolition and rebuilding. In my opinion this is not bad. This means that modern architecture in the city will have more chances to break through than under Luzhkov. Well, roughly speaking, there will be more daring construction projects.

Russia Today: If new mayor solves at least some problems, he will become a political figure

The article from Novoye Vremya magazine of 26 March, 2007 recalls the beginning of the governor of Tyumen region, noting that after Sobyanin's election as a governor, the south of the region and Tyumen had a wave of real estate redistribution, and the businesses close to the former head of the administration were forced out by the competitors who had connections with the new officials. There is no doubt that this process will happen in Moscow. And considering how much real estate and construction in the capital are related to the activities of the Moscow building complex, which was essentially formed as a family and clan structure in the years of Kaganovich, it becomes clear that there will be major disruptions.

Let me explain. The building complex is heavily dependent on domestic relations and agreements. Specifics of the work on projects lasting two to five years mean that much depends on how people keep their word. In Moscow there is a tradition to keep your word just when it comes to "your people." If you inadvertently break the system, then everything will collapse. The question is whether the new mayor will be able to minimize the costs of this process and preserve the construction system that is not very healthy at the moment.

I believe that major changes that ultimately affect the real estate market will be made in the context of the fight between the two aforementioned trends: the active introduction of new construction and partial destruction of the existing construction system. One has a "plus" sign, the other has a "minus" sign. One thing leads to lower real estate prices, the other - to their growth.

Just yesterday I spoke with an average official. Among other things, he bitterly said that there are no new construction projects. Everything that passes through his hands is either something old or well-forgotten old. Moscow residential construction is collapsing. We should also add transition of building assets to the hands of lay people from the investment and financial institutions. Sobyanin comes in a very difficult time for the Moscow construction, and will be tempted to vigorously change and remake everything. Exactly how the events will unfold will be clear when a new mayoral team forms. Old guys or Vikings - this is the next stage, which will largely determine the prospects of the construction, investments and the market.