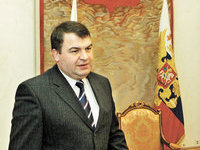 The story about the conflict between Russia's Defense Minister Anatoly Serdyukov and superintendent of a military school of airborne troops in Ryazan, Andrey Krasov, has generated very many rumors, speculations and absurdities. Now it seems hard to understand what really happened between the two military officials. On the one hand, we have the image of the rude minister, the tyrant, and on the other hand...well, there is no other hand.

The story with Mr. Serdyukov's rude order to demolish a small wooden church on the territory of the military school continues. On October 21, the Arguments of the Week newspaper wrote that Prime Minister Vladimir Putin ordered Defense Minister Serdyukov to apologize to the commandos whom he had reportedly humiliated. In addition, Putin asked Serdyukov to send in his resignation, the newspaper wrote.

For some reason, the newspaper ignored the fact that the head of the government can not order the minister to step down. This is a prerogative of the president. There is nothing surprising about the fact that governmental officials rejected the information about Putin's order to Serdyukov.

The scandal started on September 30, when Serdyukov visited the training center of the above-mentioned school and was enraged at the sight of a wooden church there. Two weeks later, on October 11, the news about the conflict between Anatoly Serdyukov and Andrey Krasov appeared on the website of the Russian Line news agency. The article on the website said that the defense minister ordered the colonel, a Hero of Russia, to demolish the temple.

The next day, the story was republished on the official website of the Communist Party, but the media showed no reaction to it. The reaction followed later, on October 15, after the publication of the video message from the Union of Russian Commandos to the President. The message was read by former chief of airborne intelligence, Colonel Pavel Popovskikh, and signed by the chairman of the union, Colonel General Vladislav Achalov and Lieutenant General Albert Slyusar. The three officials, let's say, have little liking for the defense minister.

The scandal exploded the Russian Internet. However, the statement from one of the key figures of the scandal, Andrey Krasov, who was supposedly publicly humiliated by the defense minister, was lost in the controversy. According to Krasov, the conversation with Serdyukov was very emotional indeed. The minister set out his indignation about incomplete repairs of the school canteen and utility networks. Moreover, Krasov said that his conversation with the minister was strictly a business dialogue.

Could it be possible that officials of the training center simply tried to hide the flaws that the school had and boast of having a church there instead? It definitely could. Serdyukov did not like that and expressed his thoughts with the use of foul language.

As a result, the general public paid attention to the "bad language" part of the whole story. No one said anything about the incomplete repairs of the canteen and utility networks, although this is a very serious matter taking into consideration the time of the year when it happens: winter is just about to come. Commandos are real men, as they say, but even real men need a decent place where they can eat and warm barracks where they can sleep.

It is worthy of note that hierarchs of the Russian Orthodox Church and officials of the command of Russian airborne troops stated that the entire story with the above-mentioned scandal was not worth the attention.