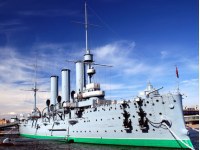 Recent media reports caused a real shock in naval community, not only in Russia but also, no doubt, in many other countries around the world: the legendary crew of Aurora cruiser will be disbanded as early as December 1, 2010. Aurora will lose the status of a warship and will become a branch of the museum. The Commander in Chief of the Russian Navy, Admiral Vladimir Vysotsky has signed a respective directive. Following the withdrawal of the ship-veteran from the Navy, the Aurora will only have civilian staff - cleaners, tour guides, security guards, and archival museum workers.

This information was confirmed by Rear Admiral Lev Chernavin, branch manager at the Naval Museum on the cruiser Aurora. According to him, now the recruitment of civilian personnel who have yet to be taught the tricks of the ship's life is ongoing. It is not ruled out that a technical team will be recruited for the cruiser for maintenance of the systems and mechanisms. A change of the cruiser's parking lot on the Neva is not planned. After the corresponding registration Aurora will be transferred from the balance of the Ministry of Defense (more precisely, the Navy of Russia) to the balance of the Central Naval Museum located in St. Petersburg. The organizational arrangements associated with another function of Aurora - training ground for Nakhimov Naval College - will probably still have to be worked out.

Here is the comment on the disbandment of the military crew of Aurora of a long-time author of Pravda.ru, publicist and historian, Captain of the 1st rank Sergey Aprelev: "Of course, the transition of the legendary warship, the pride of our navy to the civil status of the ship-museum is a kind of mockery (there are no other way to say it) of the fleet traditions. Aurora was the warship for many decades, and in my opinion, only a full-fledged crew could keep it in the proper state of the warship. The name of Aurora is associated with naval tradition, and seeing the cruiser in a civil form is simply preposterous. Hopefully, the civilian personnel under the leadership of Admiral Chernavin will still be able to accept, so to speak, the fighting spirit of the legendary cruiser, and can also impart his excursionists, which Aurora has always attracted in great numbers."

The General Staff of the Navy had no responsible persons available to comment on the situation because of the weekend. However, one of the officers Pravda.ru managed to get hold of said that the disbandment of Aurora crew cannot be considered unexpected. The arrangements of the transfer of the cruiser from the Navy to the naval museum have been planned for a long time.

Other naval sources of Pravda.ru assured that Aurora transfer to a civil status has nothing to do with the controversial party thrown on board a ship in the summer of 2009. Then head of ONEXIM Mikhail Prokhorov organized a noisy banquet on the cruiser dedicated to the 8th Petersburg Economic Forum. Later, Prokhorov said that he was ready to maintain the cruiser himself. The scandal was significantly covered by the media, and caused the apparent displeasure of the Navy leadership.

However, festive events, including cocktail parties, mostly for veterans of the Navy and guests of St. Petersburg, were held at Aurora quite often and were considered fairly traditional - any veteran of the fleet would like to celebrate aboard the great ship. The author of these lines, as a representative of Pravda.ru, participated in the International Maritime Festival twice over the years and was present at the festivities at the historic cruiser, both in the admiral's cabin, and the officers' mess. It seems that the tradition of receiving guests in the lounge at the Aurora will remain, even when it becomes a civil museum. Traditions must be preserved.

The scope of the scandal, which is now frequently mentioned by the media, has to do not with the mere fact of a party, but the name of Mikhail Prokhorov.

Anyway, the news, which at first seemed unbelievable, still holds: Aurora will no longer exist in its present, military form. Perhaps, it is needless to tell the story of the cruiser - on the Internet it is described in great detail. But perhaps it is worth remembering a little known fact that hardly even became history.

It so happened that during the last restoration of the cruiser in 1984, more than half of the body of the cruiser has been replaced. So, in principle, the current Aurora could be called a partial replica of the legendary cruiser. The remnants of the former vessel, taken during the repair, were towed to a military base of the Navy in Leningrad, and then used as building materials by the residents of the nearby vacation village. The summer residents are proud to have Aurora in their cabins.