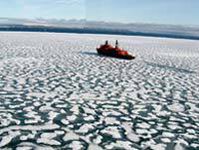 Canada is not going to make any concessions to Russia in terms of sharing Arctic riches. During the current year, Canada has considerably expanded its infrastructure in the Arctic modernizing its existent bases and building new ones.

An official message from the Canadian government said that the nation continues to demonstrate its adherence to the implementation of the previously approved Northern Strategy "to assert and defend its sovereignty."

The Northern Strategy is the main bone of contention between Russia and Canada in the Arctic region. It particularly goes about the underwater Lomonosov mountain ridge and the control over the Northern seaway.

It is worthy of note that Russian and Canadian prime ministers, Stephen Harper and Vladimir Putin, visited the Arctic desert in the summer of 2010 almost simultaneously. The visits clearly proved that the Arctic was highly important for the two countries. The head of the Canadian government stated that the geopolitical importance of the Arctic had become extremely relevant to Canada. In order to preserve the northern territory strong and free, Canada needs to solve border disputes with its neighbors, Harper added.

Canada's Arctic ambitions raised concerns with all other Arctic powers, including Russia, Denmark, Norway and even the United States. The concerns were so strong that Canadian Foreign Affairs Minister Lawrence Cannon visited Russia on September 16th.

The mission was arranged to prove that Canada did not see its Arctic neighbors as enemies. However, the statements, which Mr. Cannon released in Moscow, only added more fuel to the fire.

"The Arctic is part of us. Was. Is. And always will be," Cannon said in a short statement delivered in French and English, noting that the importance of the Arctic and Canada's interests in the North "have never been greater."

Mr. Cannon must have forgotten the fact that no country in the world holds exclusive rights in the region. In addition, the Canadian official said that the disputed Lomonosov ridge was a continuation of Canada's territory.

"We will submit our data on the Lomonosov Ridge and we are confident that our case will prevail backed by scientific evidence," Mr. Cannon told reporters at a joint news conference with Russian foreign minister Sergey Lavrov.

Thus, Canada verbally offers to solve all moot questions peacefully. As a matter of fact, Canada has been taking efforts to defend the territory at war. The nation has been strengthening its coast guard during the recent years. Canada has recently completed the construction of two army bases in the region. The nation launched three military satellites for "Arctic needs" in 2010. The Canadian prime minister stressed out that the project was a part of the nation's sovereignty defense project. Nanook 10 military drills were held at the end of August. The goal of the drills was to asset Canada's presence in the Arctic, as foreign analysts said.

Other countries of the region try to catch up with Canada. Denmark and the United states announced their intention to build state-of-the-art ice-breaking fleet.

Western media traditionally say that Russia is the primary aggressor in the struggle for the Arctic region.
"Russia is staking its economic future on its controversial territorial claim to a huge slice of the fast-melting Arctic, which holds up to a quarter of the world's untapped energy resources, and is set to launch an unprecedented diplomatic campaign to achieve its goals," The Christian Science Monitor wrote.
Foreign observers pay special attention to scientific missions, which Russia has been sending to the region recently in an attempt to prove its claims for 1.2 square kilometers of the Arctic (it mostly goes about the Lomonosov and Mendeleyev mountain chains).

Western reporters also express concerns about the possible strengthening of Russia's military presence in the region. Foreign journalists recollected the events of 2008, when Russia passed the Arctic convention which stipulates defense security of the Arctic zone and specifies the use of military force in case of conflicts.

Not all Western newspapers say that Russia plays the role of the primary aggressor in the Arctic struggle. France's Le Monde newspaper wrote, for instance, that the current relations between Russia and Canada have been extremely intense recently. Ottawa, the newspaper wrote, has been grinding its teeth against the background of Russia's intention to become Arctic leading power.

Russian military expert Pavel Zolotarev believes that it is too early to speak about the aggravation of the international state of affairs in the Arctic region.

"The current dispute is about the territories whose economic development is not going to be a matter of the near future because they are still covered with ice," the expert said.

"Ice disappears faster than scientists predicted, which makes Arctic powers claim their rights for the territories already now. It is especially important for the West to establish control over the unexplored deposits of rare-earth metals. I would not say that Canada has become Russia's biggest problem at this point. Our strongest rival in the region is the USA. The situation may change in the future too: China builds its national ice-breaking fleet too. Russia needs to take account of the militarization of the Arctic and respond adequately to that," the expert added.