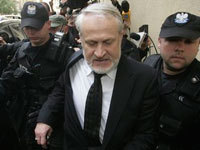 Akhmed Zakayev, the emissary of Chechen terrorists, went to the International Chechen Congress in Poland after a district court in Warsaw ordered his immediate release. The court ruling was executed in spite of the fact that Polish prosecutors previously demanded his arrest for 40 days because of the serious charges brought against him.

The lawyers of the self-proclaimed prime minister of the self-proclaimed Chechen Republic of Ichkeria were certain that they were going to win the case in Poland. They intended to seek Zakayev's release on bail. However, the Polish justice did not ask any since Great Britain had bestowed the status of a political refugee on Zakaeyv. The status is equally valid across the European Union.

Anti-Russian forces celebrate this decision as their victory, but the question of Zakayev's extradition to Russia has not been solved. It is a subject of further investigation. The official inquiry for Zakayev's extradition is currently being translated into Polish to be subsequently delivered to adequate agencies in the country. The chances for Zakayev's delivery to Russia are small, though. If Zakayev had not been certain of his safety, he would not have decided to make such a daring journey.

On the one hand, Poland, unlike other countries of the European Union, arrested the emissary of Chechen gunmen at least temporarily. On the other hand, Zakayev personally acknowledged that he had visited Poland four times during the recent year and never either expected or had any trouble.

"I feel like a free man when I am in Poland. Poland is my favorite country, and it's another country which I can visit freely," Zakayev once said.

It is worthy of note that Zakayev travels freely at the time when Interpol has an international warrant for his arrest.

Russia put Akhmed Zakayev on international wanted list in 2002 having accused him of terrorism, murder, kidnapping and other grave crimes. A group of Chechen gunmen, commanded by Zakayev, kidnapped and murdered two priests in January of 1996. They also attacked prosecutor's office in Grozny the same year in March and killed ten people.
Zakayev's case was heard in Denmark, but the court of Copenhagen found Russia's evidence unconvincing and declined his delivery. Afterwards, Zakayev found political refuge in Britain, where London again refused Russia in the delivery of the former Chechen warlord who had awarded himself with the status of the prime minister of a non-existent state.

Emissaries of Chechen terrorists feel at home in Poland. They have their office in the center of Warsaw; their mass media outlets broadcast programs in the country too. A man with a "typical Chechen name," Adam Borovsky, serves as Ichkeria's Consul of Honor in Poland. When late President Lech Kaczynski served as the Warsaw mayor, the square named after Chechen terrorist Jokhar Dudayev appeared on the city map.

Many Polish politicians and public figures have repeatedly expressed their support to Chechen terrorists. They publicly gloated over deaths of innocent people in Russia as a result of large-scale terrorist acts. The killing of Aslan Maskhadov, a Chechen warlord, was referred to in the Polish media as a crime and a big political mistake, which Russia made.

It was impossible for Russia to expect any changes for the better from Poland during Lezh Kaczynski's presidency, who was known for his anti-Russian views. Today, Poland has its new president - Bronislaw Komorowski. The tone of the dialogue between the two countries has changed.

However, Ichkeria's office in Warsaw is still open. Moreover, Polish anti-Russian activists held the international Chechen Congress in the country on September 16-18.

Konstantin Zatulin, a deputy of the Russian State Duma, said in an interview with Pravda.Ru that Zakayev had given quite a headache to the Polish administration.

"Neither Tusk nor Komorowski invited the Chechen emissary. They did not organize the Chechen congress either. It happened owing to the efforts taken by the Polish politicians, who want to make their nation's relations with Russia even worse. Russia realizes that the Polish prime minister found himself in a rather intricate situation because he does not want to ruin relations with Russia, nor does he need to anger those politicians, who treat Russia negatively.

Leonid Ivashov, the president of the Academy for Geopolitical Problems, believes that Russophobia is a phenomenon that lays the foundation of Polish politics.

"When Zakayev decided to visit Poland, he knew that he would not be delivered to Russia. One should bear in mind the fact he has the protection of British special services. They wouldn't have let him go to Poland if Zakayev's extradition to Russia had been possible. Russia should not be serious about the anti-Russian tricks from Poland and the Baltic States, even if it goes about Zakayev. One should bear in mind the fact that the Poles and the residents of the Baltic States do not enjoy much popularity in Western Europe after all," the specialist said.