The more a human being earns, the less they look human 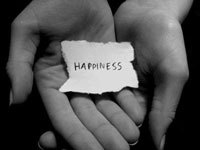 They say that happiness is not about money. Some say that there is never enough money. However, it turns out that 25 percent of Russians, or one in every four, would be happy if they were paid from 50 to 99 thousand rubles a month ($1,600 and $3,300 respectively). Many of the polled Russians said that "it would be enough for normal life." For comparison, the American happiness costs twice as much.

A poll conducted by Bigness.ru among its readers showed that most Russians consider money as a necessary factor for reaching the state of happiness. About 43 percent of Russians are certain that there is no happiness without money. Twenty-five percent are sure that money does not buy happiness.

One of Russia's recruiting portals conducted a similar research to find out how much exactly a Russian citizen would need to be happy. The poll showed that 25 percent of the polled would be happy with amounts from 55 to 99 thousand rubles a month.

Many of the polled said that they would be very comfortable with amounts from 100 to 149 thousand rubles a month ($3,300 and $5,000 respectively). "This money would let me feel comfortable in my life. Happiness is not about money, happiness is about how much money you have," - this is what many of such respondents said.

Twelve percent of respondents said that they would need smaller amounts of money to be happy - from 30 to 49 thousand rubles a month. "I can't make all the money in the world, but you can easily ruin your health, and even if you make millions it won't save you," they said.

Another twelve percent said that they would need to get 500,000 rubles a month to be completely happy (nearly $17,000). "It sounds banal, but money is never enough and one has to want more always," they said.

Four percent of the polled said that they would be happy with 30,000 rubles a months: "I don't need much - the more you get the more you want." "The more a human being earns, the less they look human."

Seven percent of the polled said the following: "Money does not make you happy, but it can give you freedom of choice and action. There is no specific amount which could give me that." "There is never enough money, and it does not bring happiness. I does not matter how much money I have, I am a happy person anyway."

For comparison, an average American needs twice as much to be happy: $75,000 a year (193,000 rubles a month). Researchers said that the lower the income level a US citizen has, the less they can feel moments of happiness in everyday life.

Happiness grows only before the income level hits the mark of $75,000. If income continues to grow, the emotional satisfaction with life begins to depend on other factors, such as temperament peculiarities of a person or incidents that may occur to them.

According to opinion polls conducted by Gallup, the happiest people in the world live in Denmark. Finland, Norway, Sweden and The Netherlands come next.