Russia’s Foreign Affairs Ministry criticized the annual report from the US State Department about the support of democracy in the world. Official spokesmen for the ministry said that some politicians from the US administration use double standards in forming their opinions about the development of democracy in Russia. 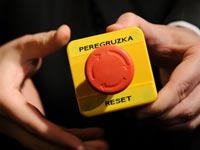 “It seems that the reset of US-Russian relations is not happening for the authors of the report from the State Department,” the ministry said in a statement.

“In respect to the situation in Russia, they used a set of theses about the “erosion” of democracy in our country. It was also noted that the president’s workgroup for civil community would “control”, as it appears, the observation of democratic norms and standards in Russia,” the statement from the Foreign Ministry of the Russian Federation said.

Russia Today: US State Department did not push “reset” button

“The authors of the report did not forget to mention the acts, which the US administration had taken “for the benefit of the Russians.” Many of such acts verge upon interference into internal affairs: the funding of the training of “independent election observers,” attempts to develop so-called independent governing structures at the local level, the lobbying of “necessary” legislative initiatives, etc.”

The report also says that the programs, which Russia implements to support Russian nationals abroad, are referred to as political provocations that must be controlled and suppressed, RBC reports.

“As for the criticism of Russia regarding violations of human rights, we are open for constructive and mutually respecting dialogue - not for lessons of morality on how we must build the “true democracy.” Subjective statements based on double standards from certain officials of the US administration about events in Russia can hardly be appropriate,” the ministry said.

“Analyzing the situation in Russia, like in any other country, it is important to realize that the problems, which may occur during the development of a state and society can and will be solved evolutionary, with due consideration of reality,” the statement also runs.

“We recommend our colleagues at the State Department not to mix the existence of such problems with reluctance to overcome them. It would also be good for the US to take a closer look at its own problems in the field of human rights, including the observation of universal norms of international right in this sphere,” the Russian Foreign Ministry said.