Medvedev Does His Best To Improve Ties Between Russia and US

Russian President Dmitry Medvedev shared his plans about his possible participation in the next presidential election in Russia. Medvedev delivered a speech at Stanford University in California to representatives of US scientific and business circles. 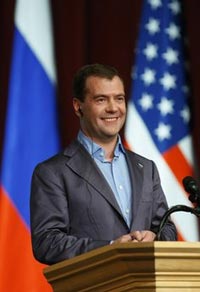 Medvedev Does His Best To Improve Ties Between Russia and US

Answering a question from the audience, Medvedev said that he did not exclude his participation in the presidential vote in Russia in 2012.

"If by that time my plans start implementing, if I have the support of our people... if I have the desire to continue, then I do not rule this out," he said.

“It is always a big test for a politician. Being a president is hard work. A person, who starts this job saying that I am ready to work for two or three terms, does not either understand what he has become involved in or is not ready for this job,” he added.

“If you work hard, if you are ready to change the world acting within legal framework, everyone has a chance for success. This is our politics, this is my politics,” Medvedev concluded.

In addition to his own political future, the Russian leader talked about Russia’s goals in home and foreign politics. He said that he would like Russia to become one of the world leaders of innovative development, a country that would be open for partnership.

“First and foremost, we have to do everything to let the talented people of the nation find a way to personal fulfillment. We have to reform the education system for that to give an opportunity to each talent to find those people who support their ideas. That is why we have launched the program to modernize schools and universities. We give grants to young scientists and entrepreneurs,” he said.

“In the nearest future we will provide all citizens of the nation with digital television and broadband access to the Internet. It will open access to all Russian and foreign information channels that will eventually guarantee freedom of speech too,” the president said.

As for the development of the political system in the Russian Federation, Medvedev said that Russia is a young democracy.

As for Russia’s relations with Georgia, Medvedev said that it could be possible to improve them only after the change of power in the republic.

“I do not see any chances to do it with the sitting president of Georgia. Speaking with the language of law, he committed a crime,” Medvedev stated.

"And this is not our fault, because we think that Russia protected its citizens and interests. Regrettably, it led to sad consequences, but I wish our relations with Georgia are back to normal," he said.

"Furthermore, I'm absolutely sure that this would happen. The two neighbors just cannot afford to carry on endless polemics and squabbles. We lived together for centuries, and we always had very good relations," Medvedev said.

The president also said that he would do his best to develop relations between Russia and the US.

"I will work to ensure very warm relations between our countries, our universities," he said at a meeting with representatives of business, scientific and public circles in the Stanford University.

He said he was inspired by what he saw in Silicon Valley and at Stanford University.

"Seeing is believing... It is really impressive," RIA Novosti quoted Medvedev as saying.