Russia To Resume Test Launches of Bulava Missile in November 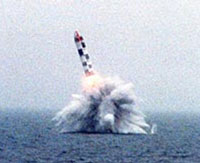 Russia To Resume Test Launches of Bulava Missile in November

Three identical missiles will be built and launched to investigate the reasons of previous failed launches.

“We are now working on three absolutely identical missiles. We hope that it will help us find the mistake, if there is one, since it will have to occur to all the three missiles. The most important aspect here is to control the assembly process to know for sure that the three missiles are identical,” the official said.

“The problem of the failed launches lies in the assembly technology. We do not see any other errors there. It’s all about the quality of the assembly. Every unsuccessful launch has its reasons, and all of them are different,” Serdyukov told RIA Novosti.

Bulava’s designer Yury Solomonov also believes that constructive solutions used in the project have nothing to do with the failures.

Bulava is said to become the basic weapon of Russia’s naval strategic nuclear forces. The nation is already building new submarines designed especially for the missiles. Russia has conducted 12 test launches of the missile, although only five of them have been successful. The most recent test launch was performed on December 9 and ended with a failure. It produced a colorful atmospheric phenomenon which stunned citizens of Norway.

The Bulava is a submarine-launched ballistic missile under development in Russia. The Moscow Institute of Thermal Technology is chiefly responsible for the missile's design. Bulava carries the NATO reporting name SS-NX-30 and has been assigned the GRAU index 3M30. In international treaties, the common designation RSM-56 is used.

The Bulava design is based on the Topol M, but is both lighter and more sophisticated. The two missiles are expected to have comparable ranges, and similar CEP and warhead configurations.

The Russian military developed Bulava to possess advanced defense capabilities making it resistant to missile-defense systems. Among its claimed abilities are evasive maneuvering, mid-course countermeasures and decoys and a warhead fully shielded against both physical and Electromagnetic pulse damage. The Bulava is designed to be capable of surviving a nuclear blast at a minimum distance of 500 meters. Prime Minister Vladimir Putin has claimed that Bulava could penetrate any potential anti-missile defense system.

The Bulava is planned to carry up to 6 MIRV warheads with a yield of 150 kT each. A full-capacity payload requires the forfeiture of all final stage countermeasures and of some shielding.