Veterans Stand Against Any Attempts To Rewrite History of Victory

Military from the countries of anti-Hitler coalition – France, Great Britain and the US – will participate in the Victory Day parade traditionally held on Red Square on May 9. This news caused some political forces issue a statement that sounds something like “NATO boots don’t fit on Red Square.”Veterans are genuinely surprised by these attempts to re-write the history. 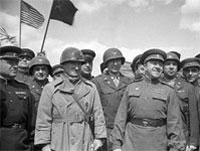 Veterans Stand Against Any Attempts To Rewrite History of Victory

Those who are opposed to the Parade in Moscow state that since the NATO countries used to conduct an exhausting cold war against Russia which prevented the country from timely restoration of the national economy devastated by the war, all their merits as the USSR allies during World War II should be neutralized.

No one knows who is targeted by such statements, but those who shed their blood on battle fields during the Great Patriotic War do not understand why their allies who fought against fascist occupants in Europe should be deprived of their right to remember the Great Victory.

“We fought against the enemy together and shed our blood together. We took over Berlin together and fought against fascism together. We will always remember the opening of the second front and the historic Elbe link-up, and the help that our allies provided to our motherland. Battle brotherhood cannot be destroyed, and the history cannot be re-written,” says the statement signed by the Hero of the Soviet Union Romantsev and Hero of the Russian Federation Fadin. “In this regard, the attempts of the Communist Party to re-write the history and condemn the participation of the anti-Hitler coalition in the Victory Parade are perplexing and surprising.”

Every year, in the end of April, the famous Elbe link-up is celebrated. In German town of Torgau where 65 years ago, on April 25, the USSR Army met its American allies, memorial services are held for three days. The events are attended by both the participants of the link-up and their descendants. Memorial events commemorating this day are held all over the world. Russian consulate in New York delivered certificates of merit to former Russian soldiers and memorial medals to American soldiers. It has not crossed anyone’s mind to criticize the Soviet Union. The Germans did not blame Russians for the Berlin Wall, and the Americans did not bring up the threats of the “Russian bear” from the cold war times.

“The Elbe link-up became a symbol of military brotherhood,” believe the officials of the Regional Public Fund for Support of the Heroes of the Soviet Union and Russian Federation. “We are convinced that the “spirit of the Elbe” and the atmosphere of mutual trust mean much more that preconceived notions and mutual offenses. The time of cold war is long gone. We are convinced that the participation of the military divisions of the countries that fought against Hitler troops will become an important step towards the development of partner relations between our countries.”

The issues of collaboration with the NATO countries are extremely important with respect to the resistance to terrorist threats. “I believe that this Victory Parade under the current circumstances when there are enough threats to international safety symbolize the way the armies of the Russian Federation and NATO countries should act. We should be united against terrorism, against distribution of weapons of mass destruction, in the struggle with pirates and many other challenges. This is the actual example of how we should unite our efforts against real, not imaginary threats to the international safety. To do this, we created the “Russia – NATO” council and are ready to participate in the mutual analysis of the existing threats. The history of comradeship-in-arms during World War II is the example for our generation,” said Victor Ozerov, Chairman of the Federation Council Committee for Security and Defense.

The statements saying that the boots of NATO soldiers will offend the Russian sacred spot, Red Square, along with another one saying that “this is an attempt to pocket OUR victory, make it THEIR victory over Russia,” sound more than strange. Meanwhile, if you think of it, on May 9 Russia is a full-fledged host of the event. It was the Soviet Union that made the largest contribution to the victory over fascist Germany and it would be bizarre if the French or British would suggest that Russia sends a delegation to participate in a victory parade on the Yelisey Fields or Trafalgar Square.

“For me personally, it will be nice, standing on the platform, watching the “boxes” of armies of World War II allies under the command of Moscow military district. Walking around the Mausoleum they will salute the Supreme Commander-in-Chief, the President of the Russian Federation. I think it is a matter of prestige for Russia,” Ozerov thinks. He believes that in the future they could think about expanding the circle of the parade participants and invite representatives of the countries that actively fought against Hitler, for example, from former Yugoslavia.

It is worth mentioning that World War II veterans were very serious about the attempts of certain irresponsible politicians to re-write the history in their political or party interests. “The Victory Day remains the day to commemorate the heroic deed of everyone who fought against inhumane Nazi machine, a sacred day for all people. We won this horrific world war together, and should celebrate the victory together,” they say.