An outstanding event took place in the relations between Russia and Ukraine. On April 14th, Russian Defense Minister Anatoly Serdyukov handed over a replica of the Banner of Victory to his Ukrainian counterpart Mikhail Yezhel. The replica of the banner will decorate festivities held in honor of the 65th anniversary of the Great Patriotic War. Afterwards, Ukraine will keep the banner at the National Historical Museum in Kiev. 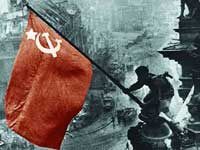 The Banner of Victory is the State Flag of the Soviet Union, which was made hurriedly in the field. It was originally the attack banner of the 150th Idritsky Rifle Division. This flag was erected on the Reichstag building in Berlin on May 1, 1945 by three Soviet warriors – Mikhail Yegorov, a Russian, Aleksey Berest, a Ukrainian, and Meliton Kantariya, a Georgian. Today, the Banner of Victory is one of the main exhibits of the Central Museums of Armed Forces in Moscow.

The two ministers also made necessary arrangements about the participation of Russian and Ukrainian military men in victory parades, which are being currently organized and prepared in different cities of Russia and Ukraine. The Ukrainian servicemen will march on Moscow’s Red Square on May 9th, whereas Russian soldiers will march on the streets of Kiev, Sevastopol, Odessa, Kerch and Nikolayev.

The meeting of the two ministers testified to the fact that the bilateral relations between Russia and Ukraine have improved recently. It was hard to imagine that during Viktor Yushchenko’s stay at power. The former Ukrainian president would always speculate on history subjects and did his best to attract public attention to the episodes, in which Russian and a part of Ukrainians were enemies.

Yushchenko went too far when he said that the warriors of the Ukrainian Rebel Army commanded by Roman Shukhevich, a prominent member of the Organization of Ukrainian Nationalists, should be regarded as war heroes. Yushchenko said that the Ukrainians, who waged war on the side of Nazi Germany, were fighting for freedom, just like the soldiers of the Red Army.

However, war veterans remember that the Ukrainian nationalists were exterminating hundreds of thousands of civilians – the Poles, the Jews, the Russians and people of other nationalities. They also killed many Ukrainians, who refused to cooperate with them.

Russia was seriously concerned about such views of the previous Ukrainian administration. The majority of Ukrainians harshly criticized Yushchenko for his attempts to distort history too. Most of them treat the Ukrainian nationalists as traitors and criminals. However, the ex-president did not want to refuse from his words, and the joint celebration of the holy day could not be possible.

The situation started changing after Viktor Yanukovych took office of the President of Ukraine. A court of Donetsk nullified Yushchenko’s decree about the glorification of Stepan Bandera, and the administration of the new president supported the ruling. There is a hope that there will be no more gloating over the war memory.

Vladimir Skachko, a historian, said in an interview with Pravda.Ru that the new Ukrainian administration would no longer defame Red Army veterans as suppressors of freedom of the Ukrainian nation.

“Ukraine’s new minister for education said soon after Yanukovych’s victory at the elections that the events of 1941-1945 would be formulated as ‘the Great Patriotic War’ rather than ‘Second World War’ in Ukrainian text books on history.

“The appearance of the replica of the Victory Banner in Kiev means that the previous administration of Ukraine has lost its influence entirely. Many Ukrainians are very glad that Russia has sent this symbol to us. It was Russia’s recognition of Ukraine’s contribution to the defeat of the common enemy.

“The leaders of the Ukrainian nationalists signed a treaty on June 30, 1941 about the establishment of the new world order in cooperation with the German Army and the Fuhrer of the German nation Adolf Hitler. They did not fight against Nazism - they were satellites of the Third Reich and cooperated with Nazi Germany to exterminate Slavic and other nations in Eastern Europe.

“I would also like to say that Ukraine needs to pay more attention to veterans. The Russian authorities have started giving them new apartments, but in Ukraine they only give boxes of sweets and bottles of vegetable oil,” the expert said.