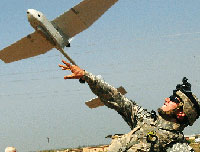 “The Russian Armed Forces now have two types of unmanned aircraft. Unfortunately, they can not be compared to foreign analogues from the technical point of view,” the official said Wednesday at a news conference in Moscow.

Popovkin added that the cost of the Russian arms has recently become comparable to defense products of foreign states.

“This is caused with the growth of the prices on raw materials and a lower labor capacity at enterprises of the domestic defense industry,” Itar-Tass quoted the official as saying.

“Last year we developed a program to test the drones. None of them passed the tests, although we’ve spent five billion rubles on the project,” Popovkin said.

In 2009, Russia was forced to purchase dozens of unmanned aircraft from Israel.

“We thought out all the decisions that we made in connection with the need to purchase arms from abroad. Unfortunately, we can not expose all our plans, how the arms are going to be used and where. All that we buy, we buy to cover the holes,” the official said.

The decision to purchase unmanned aircraft from Israel was not spontaneous, Popovkin said. The Russian defense complex lags far behind those of other countries at some points, especially when it comes to the production of sniper weapons. As a result, Russia has to purchase such arms from abroad.