What does Prime Minister Stephen Harper have in common with the Canadian Minister of Defence? He shares a sinister, hypocritical and belligerent discourse bordering on the lunatic fringe of the international community. Yet Canada’s new-found megalomania is the least of Russia’s worries: How can climate change in the Arctic threaten her national security? 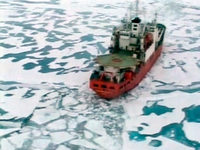 From Canada, Russia has become used to seeing and hearing positions of sheer arrogance, unadulterated insolence and provocative intrusion. Take for example Prime Minister Stephen Harper’s declaration that Canada is “an Arctic Superpower” (what all thirteen of them?) and the idiotic reference by the Canadian Minister of Defence, Peter McKay, about Russian “overflights” outside Canadian airspace. How can you “overfly” outside?

Why climate change could be catastrophic for Russia

And what if global warming melts the permafrost?

Yuri Averyanov, a member of the Russian Security Council Administration, declared this week in an interview with Rossiiskaya Gazeta that climate change will pose a serious threat to Russia’s national security and that the melting permafrost could cause Russia “serious trouble” within ten to fifteen years.

The result of this, according to Averyanov, will be that thousands of kilometres of pipelines, railways and roads will be in danger, along with a great number of towns and villages. He predicts that in Yakutsk, Tiksi and Vorkuta up to a quarter of all homes could be rendered useless due to unstable conditions of the soil arising from the meltdown.

Given that the permafrost covers 66 per cent of Russian territory, a dramatic change in climatic conditions could threaten all engineering structures in this region, considers Averyanov.

Besides this, Yuri Averyanov considers that interstate conflict is a real possibility due to the new policies of allies of the USA in the Arctic in expanding exploration and research operations. Indeed, the possibility is referred to in the Russia National Security Strategy, adopted in Spring 2009 and mentioning the use of armed force and conflict over hydrocarbon resources.

In the event of a showdown between Russia and Canada, it is obvious that Russia would win. Yet Canada is becoming more and more arrogant, feeling its back covered perhaps by Big Brother to the south. Maybe it is time for Canada to stick its nose into its own affairs and forget adventures which might bring it dire consequences.