While certain western-leaning media circles paint ominous pictures after Sunday’s regional elections in Russia, claiming that things are dire for the Government Party, United Russia, a close analysis of the results shows most clearly that the winner was one party, and one party alone: United Russia. 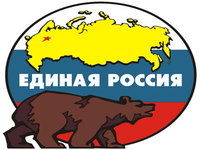 On Sunday 76 out of the 83 regions of the Russian Federation voted for local councils and eight regions held elections for Regional Parliaments. Almost half of the electorate turned out (not bad for mid-term elections, and regional/local elections at that) and around half of these voted for United Russia.

The remainder? The anti-Kremlin Liberal parties came nowhere, once again the darlings of western circles receiving close to zero attention among the Russian electorate, which knows what it wants, which shows a political maturity that teaches a good lesson to those who wish to become its detractors.

In first place in these regional and local elections, with an overwhelming majority (more than twice the second-placed party and more than the three opposition parties put together) was United Russia, the Party of President Dmitry Medvedev and Prime Minister Vladimir Putin with around 50 per cent of the vote.

In second place, globally, was the Communist Party of the Russian Federation (whose leader is Gennadiy Ziuganov) with around 20% and in third/fourth place were the Liberal Democratic Party of Russia of Vladimir Zhirinovsky and the Fair Russia Party of Sergei Mirovnov with around 15 per cent each.

Attempts to play down the main strokes drawn by the Russian electorate in this election, trying to spell gloom and doom for United Russia (mentioning that demonstration of 10.000 people in Kaliningrad, as if a demonstration of 10,000 people in a population of nearly 150 million is representative) are a very amateurish attempt to deny clear signals from Russia where political pluralism and maturity are mainstays emanating from all levels, starting at the Government and finishing with the people.

Only last week, Prime Minister Vladimir Putin stated that “Generally speaking, the task of the mass media is to criticize and this is correct. The Government must feel that it is being viewed through a magnifying glass and that it is under public and media attention and control”.

So if United Russia gets more votes than the three main opposition parties put together, as predicted in this column two weeks ago, if the Russian economy is picking up due to United Russia’s policies, then why are western-based media outlets saying anything other than the fact that the Russian people continue to support President Medvedev and Prime Minister Putin?

Shall we disseminate lies, or the truth. The truth, in Russian, is “Pravda”.