The year 2009 has been replaced by the year 2010. In economic terms, moreover, without any regrets! The economic crisis really hit the majority of world economies by forcing smaller local performances in 2009, compared with the economic results achieved in previous years. 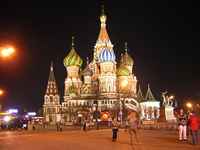 Pausing to examine some macroeconomic indicators of Russia's economy can be summarized with the following results:

As per Bancroft-Hinchey (2009), despite the severe economic crisis, a policy (the crisis) of sensible containment of public spending and a good investment program (prominently in social policy) protecting large areas of the Russian economy and its jobs, has led to a scenario in which Russia can once again, create prospects for surprisingly positive economic growth rates, and that was in 2010.

Just to give you an idea, Russian economic authorities re-designed the local GDP growth to 3.1% (in 2009). Also last year, the appreciation of the Russian stock market (Micex - in U.S. dollars) was about 113.24% (SCIARRETTA Fagundes, 2009).

Viewing the data on Russian economic perspectives, it should be remembered (as placed in ECONOMY WATCH, 2009) that Russia ended 2008 with growth of its GDP by 6% after 10 consecutive years of average annual growth of 7%. From 2002 to 2008, investment growth in fixed capital and personal income have, on average and in both cases, stayed above 10%.

During the past ten years, poverty and unemployment declined steadily and the Russian middle class has expanded. Russia has also improved its international financial position with the implementation of a surplus in its balance of payments (this since 2000). Moreover, Russia's foreign reserves were at a record high (in mid-2008). On the other hand, the total public external debt of the country is about one third of its GDP. But the state component of the external public debt has decreased. Clearly, the global economic crisis also affected Russia's banks and financial institutions that faced liquidity problems.

But, again, Russian authorities responded by starting an economic rescue plan to exchange and to increase liquidity in the financial sector, thus helping domestic companies and supporting the stock market. The government also announced a plan of tax cuts and other measures to help its people and their companies.

In the first year in office, President Medvedev outlined a number of economic priorities of Russia, including (among others): the improvement of infrastructure, incentives for innovation, increased investment and tax and financial reforms.

However, specifically with respect to innovations, according to Voice of Russia (2009), "things are not going well in Russia." Applied in practice, barely 5% of the projects developed. The main cause of this are the attempts to drive to political an innovation policy based on the neoliberal model. This is a mistake. No country in the world applies alone the methods and innovations of market economy. The state is always paramount and must launch a project of illustrative innovation. In this context, the futurist Kalachnikov has two proposals.

The first is going to create, in the outskirts of Moscow, a city of the future in that several important areas are developed to the innovation (such as the biotechnology, for example). The second idea is to create a national system of efficient innovations in Russia. For him, there are several promising options of development based on innovations. Such possibilities for the Russian economy are manifold: spatial development, artificial intelligence, etc..

Turning to the economic outlook (also per BANCROFT-HINCHEY, 2009), Russian economic officials predict for the economy in 2010, a budget surplus of 1% and recovery rate of the ruble by 17% . Also, it is believed that the average economic growth (per year) of GDP (constant prices) in Russia is on the order of 5% for the next four years (ECONOMY WATCH, 2009).

There were 123 works including paintings, posters, sculptures and costumes, which helped form the foundations of the modern art world. Works that express the Russian artistic ferment in the first half of the twentieth century, which arose in various fields such as non-objectivism, suprematism, constructivism and Russian realism. By the way, I went to see the exhibition (held in the cities of Brasilia, Rio de Janeiro and Sao Paulo) and it was magnificent and showed the spectators, of course, the strength of Russian art of the past century and their undoubted connection with the concrete events happening to the Russian people at that time.

Indeed, one cannot understand the magnitude of a shift if it is not referred to the context in which it was produced and is precisely the context that identifies the traits that distinguish it as such (CCBB, 2009, p. 10).

We are waiting (eagerly and soon) the new source and turn Russia!

Professor and researcher in the field of economics