The female tiger, on which Vladimir Putin put a GPS collar a year ago, is doing fine. The tiger is alive and healthy and has recently become a mother. The news about the tiger’s life had to be announced officially due to concerns that appeared in the Russian media. Many Russian news agencies wondered how the tiger was doing because the collar had not been transmitting any signals since September. 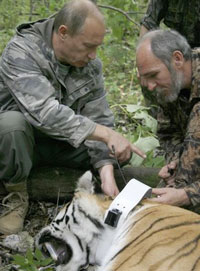 “The scientists, who study the Amur tiger in the Far East of Russia, have recently replaced the tiger’s collar because the batteries in the previous collar went off. For the time being they are establishing the communication network to track the tiger in the woods,” Putin’s press secretary Dmitry Peskov said.

The official added that the scientists also put the GPS collar on the tiger cub. The cub already looks like a large predator, not a cute and fluffy kitten, Peskov added.

Putin’s press secretary thanked everyone who showed interest in the life of Putin’s tiger and asked everyone not to worry about the animal, Itar-Tass reports.

There is a special section on the website of the Russian prime minister devoted to the protection of Ussuri tigers. There is also a map there which indicates the movement of Putin’s tiger.

Accompanied by expedition chief Vyacheslav Rozhnov to the HQ tent, Putin examined equipment for studying large predators - a GPS collar, photo-traps, a steel snare, and a pneumatic immobiliser gun with a scope sight (see hyperlinks), which he tried.

Zoologists offered Mr Putin a trip to the heart of the taiga to where a five-year-old female tiger had been trapped several kilometres off the camp. They travelled half the distance in jeeps, and the other half on foot. While on the spot, he was shown snare-setting and the performance of a photo-trap.