Nuclear Strike - Russia's Only Way to Defend Itself?

Nikolai Patrushev, the secretary of the Russian Security Council, dropped a bombshell in his recent interview. Russia has been working on a new military doctrine for a few years. The old one is outdated and unsuitable. The work is difficult because despite Russia’s strength and independence, it has to consider the ever-changing environment. Russia had to find a completely different approach to Bush and Obama, Shevardnadze and Saakashvili, Yushchenko and his successor. And the ways of defending against them are very different, too. 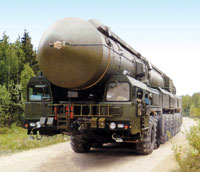 Nuclear Strike - Russia's Only Way to Defend Itself?

Patrushev said that the Russian Security Council offered President Medvedev a universal option, the toughest one. In situations “critical for national security” Russia will deliver preventive nuclear strikes. According to an explanatory dictionary, “preventive” means “serving to prevent or hinder.” This means that Russia will be able to hinder its neighbors with a small nuclear bomb. This will serve to prevent them from thinking that they can impinge upon Russian interests.

Unfortunately, Patrushev did not clarify whether the conflict in South Ossetia was critical for national security. That’s too bad, because if he did, it would be easier to evaluate future conflicts and decide if it’s time to press the red button yet.

At first sight, the new doctrine doesn’t look good. Especially if we think that there is no mention of preventive strikes in a similar American document.

Being the largest country in the world that borders with 12 other countries and has its own opinion on every issue, it’s natural that Russia has enemies. Defending the enormous border from smugglers alone is an extremely challenging task, let alone potential armed conflicts or wars.

The current Russian army is weak. Although it has strong professionals, the majority of the Army is undertrained draft soldiers and contractors with six month contracts. It would be quite scary to imagine a real conflict between the Russian army and NATO or even the Chinese Army. That’s why Russia’s only chance under the circumstances is not to aim at military forces of a potential enemy, but influence civilian society. Russia would have to convince the entire world that if, say, German tanks cross Polish-Belarus border, they might not but Berlin will cease its existence in a couple of hours.

It’s doubtful that there is a person among Russian officials who would have guts to push the button. However, a mere possibility of such outcome eliminates a possibility of aggression from a civilized enemy.

Despite Russian military doctrine, real aggression against Russia is possible only from those who don’t normally count their losses. Russia is lucky to have Central Asia as a buffer between itself and Afghanistan and Pakistan. If the Taliban or other similar organization decided to show their might on Russian territory, who would Russia bomb in the Afghan desert? Russian nuclear plans would hardly change anything in the country where the rest of the world failed.

Several thousand gunmen could be “critical for national security” only if they re-train as terrorists. Russia’s main enemy is still its old friend China that takes away Russian territories, populates Russian land and issues maps where the Russian Far East is indicated as a part of China. If this is not a threat to national security then does security exist at all?

China doesn’t care about the Russian nuclear arsenal. They won’t mind if a couple million of their people are killed for the sake of the greater goal. They have a different mentality; they are indifferent to the issues of life and death sacred to the West and they treat pain differently. Europeans struggle for euthanasia and invent painless executions whereas Japanese perform hara-kiri and Chinese are the world leaders in sophisticated methods of torture. Taking into consideration that contemporary bombs are much “cleaner” than those that were dropped on Hiroshima and Nagasaki and that their main function is destruction and not contamination, Russian bombs would hardly prevent anything. If China chooses radical methods of solution of East Siberian issue, Russian military doctrine is at risk of shooting into an empty space.