Russia and China will hold their joint military exercise on July 22-27 on the territories of the two countries. About 3,000 military men, 300 units of military hardware, over 40 planes and helicopters will take part in Peace Mission-2009 drills. 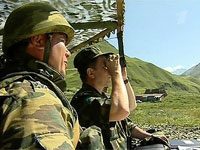 The event will start in Russia’s Khabarovsk with political consultations between the military chiefs of the two countries. The maneuvers will begin on July 23 in China.

Peace Mission-2009 is the third military exercise between Russia and China. The previous two events took place in 2005 and 2007.

Alexander Khramchikhin, the Director of the Institute for Political and Military Analysis, said that all military drills, which different nations hold today, were associated with counter-terrorist activities.

“There is a political motive there too. We want to show it to the USA that Russia has a strategic partner – China – and that Russia will not be following the USA’s directions. Moreover, Russia is ready to demonstrate that it is following a different political course,” the specialist said.

“However, one should bear in mind the fact that China intends to study Russia’s strong and weak points during the drills in case Russia becomes its adversary in the future,” Mr. Khramchikhin added.

For the time being, Russia and China share common political objectives. The leaders of the two countries believe that the world order should not be based on the dictatorship of one single state only.