OSCE Resolution: The case against Estonia 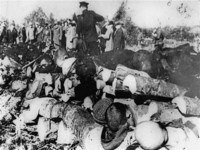 OSCE Resolution: The case against Estonia

As in Latvia, the extermination policy counted on the willing participation of national citizens, the Estonian SS Division and the 287th Estonian Police Battalion bearing witness to this. As with the other Baltic States, little has been done to bring the criminals to justice.

Directly involved in the mass murder of Jewish citizens were the Estonian Security Police and the Omakaitse (Home Guard). They rounded up and exterminated between 400 and 1,000 Gypsies, 6,000 Jews and 15,000 Soviet p.o.w.s. Tens of thousands of Jews from other countries were sent to the Estonian extermination and work camps. The national Jewish population was virtually exterminated. It was the first country declared Judenfrei (Jew free) at the Wannsee Conference in Berlin in January, 1942.

The Estonian Aleksander Laak masterminded the Jagala Camp, where Jews were sorted into two categories: fit for work and unfit. The latter were sent by Laak to the Kalevi-Liiva extermination camp.

In the words of the OSCE document, genocide, human rights violations, war crimes and crimes against humanity.

Photo: Corpses found by Soviet troops at Klooga, Estonia. The bodies had been stacked up for burning by the Estonian extermination camp guards.