Obama comes to Moscow to throw loop on Russia's neck

US President Barack Obama is coming to Moscow today. Russian experts do not think that the landmark visit will result in any breakthrough of relations between the two countries. 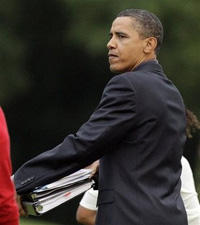 Obama comes to Moscow to throw loop on Russia's neck

“One should not expect any sensations. Nothing will change in world history during the two days of his visit to Russia. Achieving fundamental agreements is predetermined with the course of previous events,” Anatoly Utkin, an expert with the Institute for the USA and Canada said.

“A lot of things have changed since then, but who said that the USA and Russia would never be able to achieve success? The US sitting president reminds Kennedy, who was ready to compromise.

“Most likely, the US leader will offer Russia to reduce nuclear arsenals to 1,500 nukes for each of the two countries. All other aspects require a deeper insight taking into consideration the fact that it is extremely hard to solve all or many problems in two days. Obama will probably pay special attention to the modernization of the Nuclear Non-Proliferation Treaty, which was signed in 1963. Today, one may describe the document as “toothless” – no one punished India and Pakistan in 1999 when they publicly violated it.

“The future of the globe depends on Russia and the United States: they own 95 percent of world’s nuclear arms.

“Obama’s visit to Russia is obviously a positive phenomenon. Russia has not had a conversation like that with the United States for 20 years already. Most likely, it will be a preliminary meeting that will initiate the solution of many other problems that the two countries have. The world’s two superpowers must eventually shake hands,” the expert said.

Russia’s former Defense Minister Igor Rodionov is not so optimistic.

“As for the nuclear disarmament, I definitely support this. One could understand the arms race during the Cold War. The race was necessary indeed as an element of nuclear deterrence against the background of the competition between the two systems. Why do Russia and the USA need the arms race now?

“However, no one has shown an example yet, which other countries could follow. As a result, the nuclear arms continue to sprawl all over the world. I would not expect anything positive from Obama’s current visit to Russia. One should not think that America wishes Russia well. It is the United States that impedes the disarmament process: the nation tries to promote its world order everywhere. Obama’s visit is an attempt to sound out Russia ’s sentiments, to bring Russia closer to the West.

“Big politics is like an iceberg. We see only the tip – the things that they let us see, and the rest is not made public. The USA wants to give Russia a purely raw-exports role. Western countries simply want Russia to deliver cheap energy sources to them and represent absolutely no danger,” the expert said.

Anatoly Tsyganok, an expert with the Institute for Military and Political Analysis, told Pravda.Ru that Obama’s visit may strengthen the cooperation between the two countries on a wide range of issues, such as the struggle against the proliferation of nuclear arms. First and foremost, it goes about North Korea, which already has nuclear weapons.

“Nowadays, the USA stakes on the development of high-precision weapons, which Russia does not have. If Russia removes its strategic potential, it will become absolutely defenseless. Russia must reduce its arms only if the USA does the same. Otherwise, Russia may find itself in a tramp,” the expert said.